Manchester United could secure a January agreement for the signing of RB Leipzig striker Timo Werner by allowing the 23-year-old to remain with the Bundesliga leaders until the end of the season. (Express)

Napoli and Ajax are ready to move for Jan Vertonghen and tempt Tottenham into selling the Belgium centre-back, 32, before he is allowed to leave on a free transfer in the summer. (Telegraph)

Real Madrid have made contact with the representatives of Liverpool's Senegal striker Sadio Mane, 27. (Le10Sport)

Marseille and Aston Villa are among the clubs monitoring former Liverpool and England striker Daniel Sturridge, 30, who is now at Turkish club Trabzonspor. (Mail)

Tottenham are leading the chase for West Brom defender Nathan Ferguson, with the Baggies potentially set to be forced to cash in on the 19-year-old who is also being watched by Crystal Palace. (Mirror)

Inter Milan have joined the race to sign Tottenham midfielder Christian Eriksen. The 27-year-old is out of contract in the summer and is also a target for Manchester United, Paris St-Germain and Juventus. (Mail)

Who could replace Messi and Ronaldo in the 2020s?

Which players will take over from the star duo in the new decade?

Swiss midfielder Granit Xhaka, 27, will have to wait for new Arsenal boss Mikel Arteta to agree to his proposed January loan move to Hertha Berlin. (Independent)

Liverpool boss Jurgen Klopp says England midfielder Adam Lallana, 31, could leave when his contract expires at the end of the season. (Mirror)

Everton have had interest in Moise Kean, but have no intention of selling the 19-year-old Italy striker, his agent says. (La Repubblica via Star)

Sporting Lisbon's Portugal midfielder Bruno Fernandes, 25, a former Manchester United target, says he was closest to joining Tottenham in the summer than any other club. (Express)

Midfielder Jack Colback is unlikely to get his desired move away from Newcastle in January after suffering a knee injury in training. The 30-year-old was attracting interest from several Championship clubs. (South Shields Gazette)

Burnley, West Brom and Swansea are all hoping to sign Chelsea midfielder Conor Gallagher after the 19-year-old impressed on loan at Charlton in the first half of the season. (Mail) 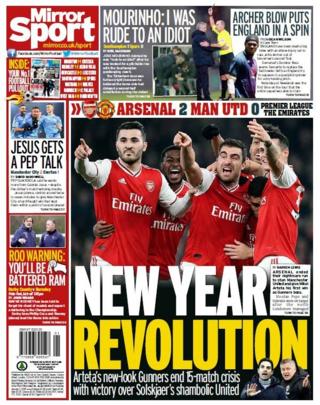