Manchester United are lining up a summer move to sign Crystal Palace striker Wilfried Zaha, 27, for a second time. (The Sun on Sunday)

Arsenal's German goalkeeper Bernd Leno, 27, is on Bayern Munich's radar as a target to be their next number one. (The Sun on Sunday)

Chelsea will make signing Lazio and Serbia midfielder Sergej Milinkovic-Savic, 24, a priority in January if the Blues' transfer ban is lifted. (Sunday Mirror)

Paris St-Germain have made initial contact over extending 20-year-old France striker Kylian Mbappé's deal but no formal offer has been tabled. (L'Equipe, via Marca)

Manchester City are set to give Dutchman Giovanni van Bronckhorst the chance to audition as Pep Guardiola's successor by appointing him coach of their sister club in New York. (Sunday Mirror)

Everton are open to selling Dutch keeper Maarten Stekelenburg in January, with the 37-year-old's contract running out at the end of the season. (Football Insider)

Wolves will complete the signing of PSV Eindhoven's 17-year-old Dutch defender Nigel Lonwijk for a nominal fee of £200,000 in January. (ED, via Birmingham Mail)

Uefa is looking at holding the 2024 Champions League final in the United States, with New York the preferred venue in a move which would see the game take place outside Europe for the first time. (Morning Consult) 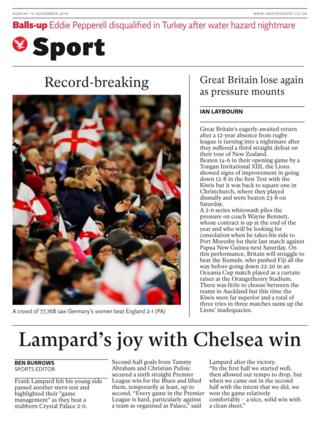 The back page of the Independent