Leicester are set to break their transfer record to sign 22-year-old Monaco and Belgium midfielder Youri Tielemans, who spent the second half of last season on loan at King Power Stadium. (Leicester Mercury)

Tottenham are closing in on a deal for Real Madrid and Spain midfielder Dani Ceballos, 22. (AS)

Liverpool are also ready to move for Ceballos. (Sportwitness)

Serbia midfielder Nemanja Matic, 30, is seeking talks with Ole Gunnar Solskjaer over his Manchester United future after being made aware of interest from Inter Milan and AC Milan. (ESPN)

Former Watford boss Quique Sanchez Flores is one of the managers Newcastle United are considering to replace Rafael Benitez. (Telegraph)

'Barca and Griezmann have disrespected Atletico'

Arsenal could sign Spanish winger Lucas Vazquez, 28, in a £31m deal from Real Madrid next week. (AS)

The Hammers have made a late bid for Celta Vigo's 24-year-old Uruguay striker Maxi Gomez, who is a target for Valencia. (Evening Standard)

Lille and Ivory Coast forward Nicolas Pepe has spoken to Liverpool, says the French club's president, who added that another club has made a bid for the 24-year-old. (RMC Sport - in French)

United are set to miss out on Dinamo Zagreb's Spain Under-21 midfielder Dani Olmo because Tottenham have reached an agreement with the 21-year-old's agent. (Muchodeporte - in Spanish)

Chelsea's English midfielder Danny Drinkwater, 29, has been told by new manager Frank Lampard that there could be a way back for him at Stamford Bridge. (Express)

Former Spain goalkeeper Victor Valdes, 37, will return to Barcelona as a coach. (Marca) 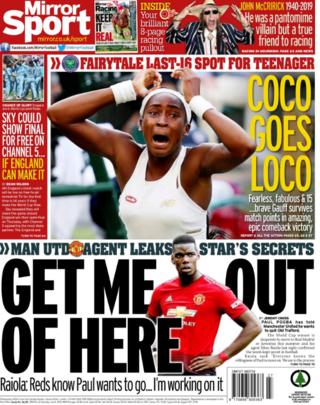 The Mirror back page on Saturday