Manchester United have pulled out of the running to sign Leicester City and England defender Harry Maguire after being told the 26-year-old will cost £100m. (Mirror)

Spaniard Arteta has been backed to take on the Manchester City manager's role when Pep Guardiola leaves the club. (Evening Standard)

Burnley boss Sean Dyche is also on Newcastle's radar but the Magpies would have to pay the Clarets a £10m compensation fee. (Daily Mail)

Inter Milan are preparing a deal for Manchester United striker Romelu Lukaku which involves taking the 26-year-old Belgium international on loan for two years at a cost of £9m and an obligation to buy him at the end of that period for £53.8m. (Guardian)

Ajax centre-back Matthijs de Ligt has accepted a contract offer from Juventus, who will now hold talks with his club to try to agree a deal worth £70m for the 19-year-old. However, Paris St-Germain have still not given up on signing the Dutch international. (Guardian)

Manchester United will meet with the agent of Portugal midfielder Bruno Fernandes, 24, to try to secure his £70m move from Sporting Lisbon. (O Jogo, via Talksport)

Manchester City could scupper Watford's deal to sign Fluminense forward Joao Pedro in January 2020 by taking advantage of a £17.9m clause in the contract to hijack the move for the 17-year-old Brazilian. (Star)

Arsenal and Uruguay midfielder Lucas Torreira, 23, says AC Milan have not made contact with him over a possible return to Serie A. (Talksport)

From Selhurst Park to Old Trafford?

Bayern Munich have held talks with Barcelona and France striker Ousmane Dembele's agent over a move for the 22-year-old. (Mirror)

League One Coventry City have launched an investigation into the conduct of their Sandwell-born defender Jak Hickman, 20, while on holiday. (Coventry Telegraph)

The Football League board has decided video assistant referees will not be used for the Championship play-off final at the end of the forthcoming season as the system is not being used for any other league games during the season. (Times - subscription required)

England Under-21 manager Aidy Boothroyd has been told his position is not under immediate threat, despite his side's poor performance in exiting the European Championship finals at the group stage without winning a game. (Times - subscription required) 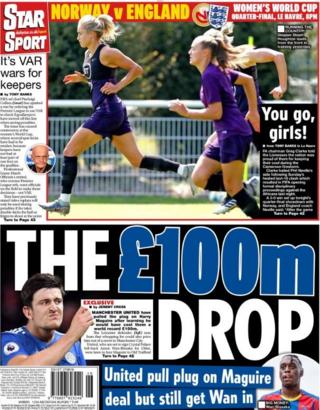