Arsenal will need to spend half of their summer transfer budget to bring in Celtic's Scotland defender Kieran Tierney, 22, with the left-back valued at £25m by the Scottish champions. (Telegraph)

Manchester United are willing to pay more than Manchester City for Leicester City centre-back Harry Maguire, 26, but the England international would prefer a move to Premier League champions City. (Sun)

The future of Croatia midfielder Mateo Kovacic, 25, at Chelsea is uncertain, with his loan deal from Real Madrid running out on 1 July. The Stamford Bridge outfit are yet to offer him an extension. (Goal)

Neymar will not be allowed to return to his former club Barcelona from PSG until he apologises to the Spanish giants' fans and accepts a cut in his wages. (El Mundo - in Spanish)

Newcastle United hope to have Rafael Benitez's successor in place by the time the team travel to China to compete in the Premier League Asia Trophy in just over a fortnight's time. (Telegraph)

Real Madrid will not consider bids of less than 50m euros (£47.7m) for 22-year-old Spain midfielder Dani Ceballos, who is a target for Tottenham. (AS- in Spanish)

Why Magpies fans are the biggest losers...

The Gunners are still interested in Dalian Yifang winger Yannick Carrasco, but are yet to make a bid for the 25-year-old Belgium international. (Football.London)

New Juventus boss Maurizio Sarri has identified Tottenham right-back Kieran Trippier, 28, as the player he wants to make his first signing but faces tough competition from Napoli who have already made contact. (Mirror)

Real Madrid's 27-year-old Colombia forward James Rodriguez, who has spent two seasons on-loan at Bayern Munich, is unsure if he will be at the Bernabeu next season. (Marca)

Liverpool expect Belgium keeper Simon Mignolet to stay at the club unless an offer is made for the 31-year-old which is good for the club and player. (Times - subscription required)

The next Chelsea manager will have the chance to keep Gianfranco Zola, who was assistant to ex-boss Maurizio Sarri last season, as part of their backroom coaching team. (Express)

Southampton are looking to sell at least five senior first-team players and want to bring in a striker, centre-back and wing-back during the summer transfer window. (Telegraph)

Real Zaragoza have denied they have agreed a deal to sell 16-year-old Spanish winger Mateo Mejia to Manchester United.(Mail)

Arsenal target Dominik Szoboszlai, 18, is keen for a move away from Red Bull Salzburg, with Barcelona and Borussia Dortmund also interested in the Hungary midfielder. (Football.London) 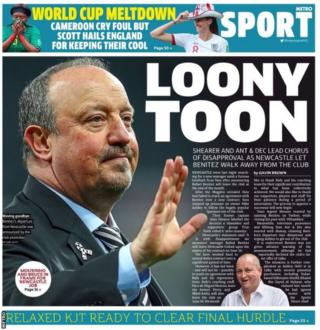