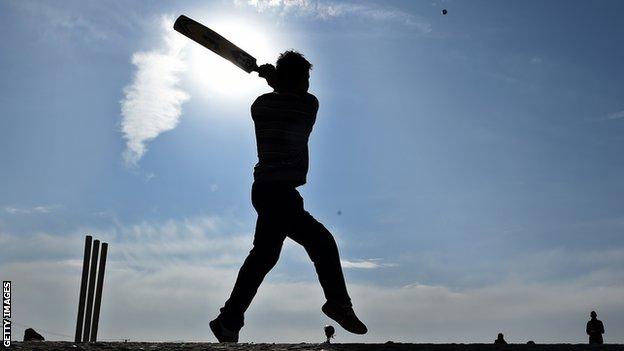 But the chances of carving out a successful sporting career are more likely in some sports for those who went to an independent school too, a new report says.

Elitist Britain 2019 looked at more than 5,000 people in the country's top professions and their educational background and concluded that "a lucky few" were given the most opportunities.

Cricket is one of the top 10 professions for independent school attendance, behind the likes of Cabinet members, military top brass and those sitting in the House of Lords - 43% of men and 35% of women playing international cricket for England went to private school.

Some 37% of male British rugby union internationals attended fee-paying schools, and about one in three Olympic medallists.

Across the wider population some 7% of people are privately educated.

Men's and women's football were the two lowest professions looked at for the study in terms of independent school attendance.

The report found 2% of female footballers went to private school, and 5% of the men.

Why does the report matter?

The Sutton Trust, a foundation set up to improve social mobility, and the Social Mobility Commission - a public body which monitors and promotes social mobility - worked together on the report.

It looked at the background of people who held "roles with substantial power and influence over people's lives", such as politicians and senior military figures.

But it also looked at those with "roles with the highest prestige, and wealth, which are among the most coveted in society" - pop stars, sports stars and actors, for example.

"Who rises to the top of fields from politics and business, to media, culture and sport matters," the report says.

"It indicates whether opportunities to reach the most sought after positions in society are equitably distributed - and whether those powerful positions draw on the talents of all sections of the population.

"There is a danger to society if many of those in such positions of power and influence are from a very similar background and a limited set of life experiences, which do not reflect the lives of the country as a whole."

How do different sports do?

The report found "big differences" across sports - and between men's and women's teams.

"Access to facilities is a crucial element of this, with many sports which require expensive equipment or special facilities resulting in a more socially exclusive participant base, including rowing, sailing and equestrian sports.

"Independent schools frequently have the funding to invest heavily in such facilities."

It cites figures showing that almost half (46%) of national schools competitions are won by independent schools, "despite 86% of competing schools coming from the state sector".

The report adds: "Football is the only profession where the privately educated are under-represented among the groups studied."

The backgrounds of British female rugby union internationals differ to those of the men, with 82% attending comprehensive schools and 13% attending independent schools - more in line with football but still double the national average.

Yet former England international Maggie Alphonsi, who grew up on a London council estate, believes women like her are the exception, rather than the rule.

"My success has been achieved in spite of the system, not because of it," she told the report authors.

"I think it's still a challenge for someone like me to get to where I have today."

However, the report says sportswomen are more likely to go to university than men because the opportunities for a financially well-rewarded professional career in sport are lower for women.

"It makes sense for women's players to attain good educational qualifications where possible," it says.

Though it covers "a vast array of sporting disciplines", the report says "there are some Olympic sports that remain dominated by the privately educated".

The 'sitting down' Olympic sports - which include rowing, cycling, sailing and equestrianism - require specialist and often expensive equipment and facilities. They are "sports historically associated with higher social classes".

"An Old Etonian has won a medal in 'sitting down' sports at every Olympic Games since 1992," the report says.

As a result, funding agency UK Sport's model of concentrating funds on medal prospects means the most money is put into these "higher social class" sports.

Citing a 2014 Ofsted report, the Elitist Britain 2019 authors point out that international athletes are much less likely to come from poorer backgrounds. "The benefits of sporting participation mean that this association is of substantial concern," they say.

They also point out the impact of local authority funding cuts on sporting facilities, and the selling-off of playing fields also limits access to sport.

The England and Wales Cricket Board (ECB) said cricket's comparatively high level of players coming from an independent school background can in part be attributed to the fact that some players start at state primary schools but win scholarships to continue their secondary education at schools with strong track records in the sport.

An ECB spokesperson added it was "vital" that "cricket should be a game for all" and pointed out it had a number of schemes designed to increase the diversity of those playing the sport.

"We are also piloting the introduction of community talent champions in key urban areas to ensure talented cricketers aren't missed and have the opportunity to develop through the talent pathway," the spokesman added.

A UK Sport spokesperson told BBC Sport: "Our job is to ensure those with talent are supported at the highest level, whatever their educational background, but of course, for us to inspire the entire nation through our athletes' performances, as is the vision of UK Sport, we would hope to see individuals from all backgrounds representing Team GB and Paralympics GB.

"Our talent identification and performance pathway work looks to provide opportunities for athletes to discover their potential in sports through non-traditional routes, but we also support the important work of our partners in the home country sports councils to open up opportunities to discover and nurture sporting talent at a young age, ensuring accessibility for all and the widest possible talent pool."

And the report authors suggest large sporting events - Birmingham will host the Commonwealth Games in 2022, for example - can also boost the uptake of sport.

But it adds that "more needs to be done to ensure it is genuinely accessible to all".

The authors recommend a series of actions to improve social mobility across all sectors, such as more bursaries to widen access to fee-paying schools.