Chelsea hope to appoint Derby boss Frank Lampard as their new manager on a three-year deal by the end of the week. (Standard)

However, those claims have been denied elsewhere, with the two clubs still locked in talks. (Mail)

Paris St-Germain forward Neymar has been looking at houses in Barcelona, fuelling rumours the 27-year-old Brazil international is set to return to the Nou Camp. (Sport)

Real Madrid have made a £115m offer for PSG's Neymar and would add either Wales forward Gareth Bale, 29, or Colombia playmaker James Rodriguez, 27, to any deal. (Mundo Deportivo - in Spanish)

Bayern Munich are set to rival Manchester City in the race to sign 22-year-old Spain midfielder Rodri from Atletico Madrid. (AS - in Spanish)

Jorginho is ready to quit Chelsea and follow Maurizio Sarri to Juventus just a year after the 27-year-old Italy midfielder joined from Napoli for £50m. (Mirror)

West Ham have told Manchester United and Manchester City that they have no intention of selling England international midfielder Declan Rice, 20, this summer. (Sky Sports).

The Gunners could make an offer for Saint-Etienne's French defender William Saliba, 18, by the end of the week. (Yahoo Sport France, via Express)

Newcastle United midfielder Mohamed Diame, 32, is expected to join Al-Gharafa in Qatar when the former Senegal international's deal with the Tyneside club expires at the end of June. (Chronicle)

Sporting Lisbon are in talks with Liverpool over a deal to sign 19-year-old Portuguese winger Rafael Camacho. (Standard)

Norwich are determined to hang on to 19-year-old English full-back Max Aarons despite interest from Manchester United. (Telegraph)

Goalkeeper Tom Heaton has turned down the offer of a new contract at Burnley. The 33-year-old England international will enter the final year of his current deal at Turf Moor next month. (Guardian)

Alternatively, Pogba fears he could be priced out of a move to Real Madrid by Manchester United's £160m valuation of the midfielder. (Telegraph)

Leicester's England defender Harry Maguire, 26, has yet to make a decision about his future amid interest from Manchester United and Manchester City. (Manchester Evening News)

England Under-21 goalkeeper Dean Henderson will sign a new contract at Manchester United before rejoining Sheffield United on a season-long loan. The 22-year-old was part of the Blades side that earned promotion to the Premier League last season. (Mirror)

Brighton are close to agreeing a deal with Portsmouth for English defender Matt Clarke, 22. (Sky Sports)

West Brom are in talks with Arsenal over a deal to sign English defender Carl Jenkinson. Scottish champions Celtic are also interested in the 27-year-old. (Sky Sports) 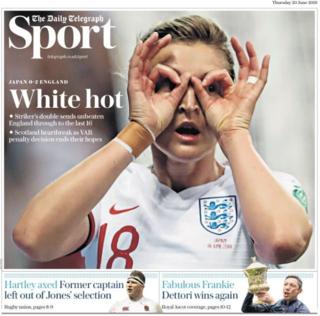 The front page of the Telegraph's sport section on Thursday