Manchester United and Belgium forward Romelu Lukaku, 26, is willing to take a pay cut in order to secure a move to Inter Milan this summer. (Gazzetta dello Sport)

United manager Ole Gunnar Solskjaer has set his club a deadline of next year to sell unwanted players as part of his rebuild at Old Trafford. (Manchester Evening News)

Spanish champions Barcelona have decided to stick with Ernesto Valverde as boss for next season despite reports he was facing the sack. (Marca)

Former Chelsea manager Antonio Conte has signed a deal to become Inter Milan boss to 2022 - five years after the Italian last managed in Serie A. (Tuttomercatoweb - in Italian)

Tottenham defender Toby Alderweireld, 30, expects to still be a Spursplayer next season despite reported interest from Manchester United in the Belgium international. (Mail)

Newcastle United have contacted Benfica over a move for Greece goalkeeper Odysseas Vlachodimos, 25, and are believed to have been quoted £13.2m. (O Jogo - in Portuguese)

Chelsea will consider bringing forward their long-term plan of appointing Frank Lampard as manager if Maurizio Sarri returns to Italy in the summer. Former Blues and England midfielder Lampard guided Derby to the Championship play-off final in his first year in charge. (Mail)

Liverpool and Wales winger Harry Wilson, 22, has decided to leave Anfield in pursuit of regular first-team football after a loan spell at Derby. Wilson is wanted by clubs from the Premier League, Bundesliga and La Liga. (Mirror)

Crystal Palace, Newcastle, Southampton and Brighton are in the race to sign Wilson. (Star)

Bournemouth want to sign Liverpool's Simon Mignolet, 31, after the Belgium goalkeeper fell down the pecking order at Anfield. (Sun)

Eintracht Frankfurt's Serbia striker Luka Jovic, 21, is unlikely to return to the Bundesliga club after clearing his locker before the European Under-21 Championships. (Bild - in German, subscription required)

Tottenham's England right-back Kieran Trippier, 28, has been ruled out of a move to Napoli after Serie A side switched their targets to younger players. (Sun)

But Villa chief executive Christian Purslow says English midfielder Jack Grealish is not for sale despite expected interest in the 23-year-old. (Express & Star)

Defender Harry Maguire, 26, has encouraged team-mate and fellow Englishman James Maddison to stay at Leicester City next season. The 22-year-old midfielder has been linked with a move to Tottenham. (Leicester Mercury) 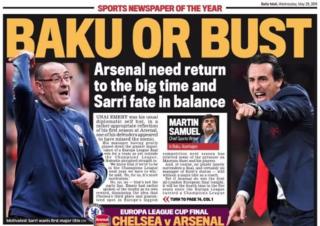