Belgium's former Everton manager Roberto Martinez is Barcelona's first option if Ernesto Valverde does not continue in charge of the Spanish champions. (RAC 1 - in Spanish)

Chelsea boss Maurizio Sarri has agreed terms with Juventus that would earn him a £1.2m-a-year pay rise. (Mail)

Barcelona winger Malcom could be on his way out of the Catalan giants, 12 months after signing from Bordeaux. The 22-year-old Brazilian was linked with a loan switch to Tottenham and Everton in the January transfer window. (Sport via Star)

Juventus' 25-year-old Argentina forward Paulo Dybala has confirmed he wants to remain with the Serie A champions next season, despite being linked with a move to Manchester United. (Independent)

Arsenal have made contact with AC Milan over the transfer of 20-year-old Italy goalkeeper Gianluigi Donnarumma. (Tutto Mercato Web via Star)

Real Madrid must pay Paris St-Germain's 27-year-old Brazil forward Neymar £1.2m a week in order to take him to the Bernabeu. (AS via Mail)

Eintracht Frankfurt's Serbia striker Luka Jovic, 21, believes the Premier League or Serie A would be a suitable destination for him as he considers his next move. (Die Welt via Mirror)

Ajax's Netherlands defender Matthijs de Ligt, 19, says reports linking him with a summer move to Manchester United should be taken with a "pinch of salt". (Fox Sports)

West Ham have had an £18m bid for Portugal midfielder Andre Gomes, 25, rejected by Barcelona. The Spanish side want between £25m and £35m for Gomes, who spent last season on loan at Everton. (Sky Sports)

Lyon's 20-year-old French midfielder Houssem Aouar, who has also been monitored by Liverpool, would be keen to play under manager Pep Guardiola at Manchester City. (Mirror)

Burnley manager Sean Dyche says he is under no pressure to sell any of his players this summer. (Lancashire Telegraph) 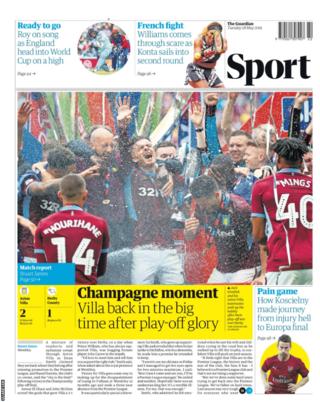 Guardian back page: Villa back in the big time after play-off glory