Chelsea manager Maurizio Sarri has agreed a deal to take over as Juventus manager after Manchester City boss Pep Guardiola turned the Italian side down. (Italian journalist Tancredi Palmeri, via Sunday Mirror)

Meanwhile, United are "very close" to signing Matthijs de Ligt, 19, from Ajax, despite Barcelona having been favourites to sign the Netherlands defender. (RAC1, via Metro)

Manchester City will offer German winger Leroy Sane £150,000 a week to try to break the deadlock in talks over a new deal, but they will put an asking price of more than £100m on the 23-year-old, who is a target for Bayern Munich, if no agreement is reached. (Sunday Mirror)

Spanish midfielder David Silva has been offered a lucrative two-year deal by a club in Qatar and may have played his last game for Manchester City. (Sun on Sunday)

Former Arsenal manager Arsene Wenger has an offer to return to management with Japanese side Vissel Kobe. (Goal.com)

Goalkeeper Weaver takes up the story of Man City's promotion back to the second tier in 1999...

AC Milan chief executive Ivan Gazidis has contacted Massimiliano Allegri to see if he wants to return to manage the club when he leaves Serie A champions Juventus at the end of the season. (Tuttomercatoweb - in Italian)

Liverpool are keen to take advantage of a contract loophole to sign 17-year-old forward Joao Pedro from Fluminense, even though the Brazilian has already agreed to join Watford. (Globoesporte - in Portuguese)

Manchester United target Kalidou Koulibaly could join Real Madrid after the La Liga club made a £79m offer for the Napoli and Senegal centre-back, 27. (Corriere dello Sport - in Italian)

Blackburn are weighing up a move for Everton's 21-year-old Germany-born striker Bassala Sambou, who is out of contract this summer. (Lancashire Evening Telegraph)

Another young forward could be leaving the Toffees, with Nigeria international Henry Onyekuru, 21, telling the club he wants to make his loan move to Galatasaray permanent in order to play Champions League football next season. (Fanatik - in Turkish)

Bournemouth manager Eddie Howe will hold talks with Republic of Ireland midfielder Harry Arter over his future following a season-long loan at Cardiff, with Fulham among the clubs interested in signing the 29-year-old. (Bournemouth Echo)

Netherlands forward Memphis Depay, 25, has sparked speculation he is leaving Lyon by posting a video on his Instagram story of him boarding a bright red private jet, in a matching tracksuit, with the caption "Merci Lyon". (Mail on Sunday)

Tottenham striker Harry Kane, 25, is on course to be fit to make the starting line-up for the Champions League final against Liverpool on Saturday, 1 June after the England striker stepped up his recovery from an ankle injury. (Sunday Times - subscription required)

Former Manchester United manager Sir Alex Ferguson is saddened that the club do not ask his advice and believes the Old Trafford outfit should have gone for Tottenham manager Mauricio Pochettino instead of appointing Ole Gunnar Solskjaer. (Mail on Sunday) 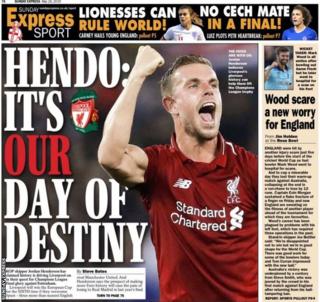