Manchester City are close to signing 24-year-old Portuguese full-back Joao Cancelo, who is valued at 60m euros (£52.9m) by his club Juventus. (Record - in Portuguese)

Newcastle United manager Rafael Benitez, whose contract expires in the summer, has yet to agree a new deal and talks could stretch into next week. (Guardian)

Newcastle United will offer 21-year-old Sean Longstaff, who has been linked with Manchester United, a new deal to keep the English midfielder at the club. (Star)

Argentine Sergio Romero, 32, will be promoted to Manchester United's first-choice goalkeeper if De Gea leaves this summer, rather than the Old Trafford club spending big on a replacement. (Mail)

Arsenal head of football Raul Sanllehi says the club had to allow Wales midfielder Aaron Ramsey, 28, to leave on a free transfer to Juventus to "keep the rationality in the salary balance of the team" and "protect the interests of Arsenal". (Telegraph, via Arsenal website)

Everton, West Ham and Manchester United have been offered the chance to sign Netherlands and Marseille midfielder Kevin Strootman, 29, on loan. (Sky Sports)

Liverpool are closing in on a £200,000 deal to sign Polish goalkeeper Jakub Ojrzynski, 16, from Legia Warsaw. (Liverpool Echo)

Bournemouth are ready to listen to offers for English winger Jordon Ibe, 23. (Mirror)

Premier League clubs made record revenues of £4.827bn in 2017‑18 compared with La Liga's combined revenues of £3.86bn for all 42 clubs in its two divisions for the same period. (Guardian)

Liverpool are having trouble finding suitable opponents for a behind-closed-doors friendly before the Champions League final against Tottenham on 1 June in Madrid. (Times - subscription required)

Manchester United Under-23 coach Ricky Sbragia has left the club by mutual consent in what is expected to be the first of a number of changes at Old Trafford during the summer. (Telegraph) 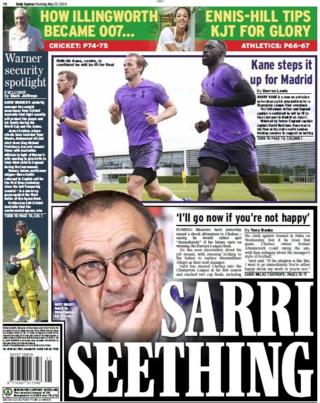