Barcelona are ready to push through a £100m summer move for Manchester United and England striker Marcus Rashford, 21. (Mail)

Chelsea will look to Barcelona's Brazil playmaker Philippe Coutinho, should they lose Eden Hazard this summer. Hazard, 28, has been linked with a move to Real Madrid and the Blues view 26-year-old Coutinho as an ideal replacement if their transfer embargo is delayed. (El Confidencial)

PSG want £26m for Belgium right-back Thomas Meunier, 27, who is a target for Manchester United, Arsenal and Chelsea. (Mirror)

Everton and Brazil forward Richarlison, 21, is the latest player to be considered by Manchester United as part of a huge summer overhaul of their squad. (Telegraph)

Maurizio Sarri's Chelsea coaching staff fear they will be sacked at the end of the season. (Sun)

Will Liverpool slip up against Huddersfield? Can Burnley end Man City's winning run?

Southampton striker Shane Long, 32, believes he is playing for his future at the club. (Daily Echo)

Bournemouth will use Bosnia goalkeeper Asmir Begovic, 31, as a makeweight as they look to sign Stoke and England stopper Jack Butland, 26. (Mail)

Wolves have made an enquiry about Besiktas and Croatia defender Domagoj Vida, 29. (Sporx - via Sport Witness)

Crystal Palace are tracking Birmingham City forward Che Adams, 22, as part of their search for a new striker this summer. (Evening Standard)

Manchester United's Belgium striker Romelu Lukaku says it would be a "dream" to play in Italy. (Sky Italia - via Metro)

Newcastle's Senegal midfielder Mohamed Diame, 31, has hinted he may leave in the summer. (Mirror)

Newcastle and Spanish forward Ayoze Perez, 25, admits the club's players are concerned about the future of manager Rafael Benitez. (Chronicle)

England Under-21 midfielder Ryan Sessegnon, 18, has refused to commit his future to Fulham following their relegation from the Premier League. (Sky Sports) 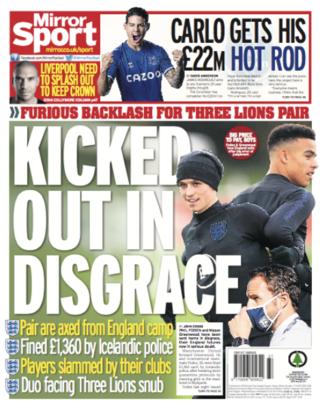 Tuesday's Mirror: 'Kicked out in disgrace'