Chelsea are resigned to losing Belgium forward Eden Hazard, 28, and want to replace him with Lille and Ivory Coast winger Nicolas Pepe, 23. (Mirror)

Real Madrid manager Zinedine Zidane has told the club to sell 29-year-old Wales winger Gareth Bale - even if it loses them money. (Independent)

Liverpool forward Sadio Mane, 27, has been linked with Real Madrid but says he is "very happy" at the Anfield club. (LFC magazine, via Mail)

Reds boss Jurgen Klopp asked for 18-year-old Brazilian forward Vinicius Junior in return for Mane when Real made an approach for the Senegal forward, 27, last season. (El Chiringuito, via Metro)

Playing football the way we all wished we could...

Barcelona president Josep Maria Bartomeu says Brazil midfielder Philippe Coutinho will only be allowed to leave if his release clause, thought to be £355m, is met. Manchester United and Chelsea are said to be interested in the 26-year-old. (TVE, via Football 365)

Leicester City boss Brendan Rodgers wants the club to complete a £40m deal to sign 21-year-old Belgium midfielder Youri Tielemans, who is on loan at the Foxes from Monaco. (Star)

Newcastle United boss Rafael Benitez, whose contract expires in the summer, has not heard back from the club's hierarchy three weeks after telling them what it will take to keep him at St James' Park. (Times - subscription required)

Denis Suarez's loan spell at Arsenal "hasn't been the best" and the Barcelona midfielder could be set for a move to Napoli, says the 25-year-old Spaniard's agent. (Radio Kiss Kiss, via Mirror)

The Gunners are the favourites to sign Barca centre-back Samuel Umtiti, but Manchester United are also keen on the 25-year-old France international. (TuttoMercato, via Star)

Monaco are likely to sign Portuguese midfielder Adrien Silva on a permanent deal from Leicester. The 30-year-old has been on loan at the Ligue 1 club since the start of the year. (France Football, via Leicester Mercury)

Juventus forward Cristiano Ronaldo's son scored seven goals in one half as the club's under-10s beat Maritimo. (AS) 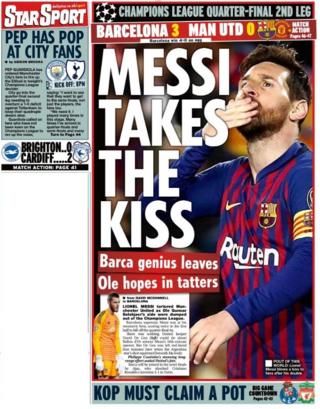 The back page of Wednesday's Star