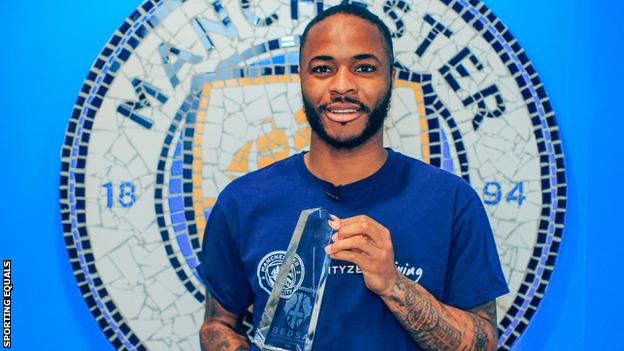 Raheem Sterling has been hailed as "an iconic British sports star" and "a trailblazer" after being named sportsman of the year at the 2019 British Ethnic Diversity Sports Awards.

The England and Manchester City forward was praised for repeatedly speaking out against racism in football.

He was presented with his award at a ceremony in London on Saturday.

"He is undoubtedly one of the UK's most thrilling talents," said awards founder Arun King from charity Sporting Equals.

"He is a trailblazer in his fight against racism. We are proud that he has become an iconic British sports star who represents so much for BAME communities and the entire sporting community, and will do for generations to come."

Sterling said the award was a "massive honour".

The BEDSAs, which were hosted by comedian Nish Kumar, are organised by race equality charity Sporting Equals and celebrate ethnic diversity in sport.

Ama Agbeze, the captain of England's netball team, claimed the sportswoman of the year award.

Agbeze, who made her international debut in 2001, helped England win gold at the Commonwealth Games on Australia's Gold Coast in April 2018.

Para-athlete Kare Adenegan, 18, was named young sportsperson of the year.

Adenegan, the 2018 BBC Young Sports Personality of the Year, set a world record in the T34 100m at the Anniversary Games, and became European champion later in the year.

Former West Brom defender Brendon Batson, who also played for Arsenal and Cambridge and helped launch the Kick It Out anti-racism campaign, said he was "very flattered" after being honoured with the lifetime achievement award.

On Sterling, Batson added: "He's a tremendous individual, one of the best players in the world at the moment and we hope he has a very long career and success with England as well."

Sterling has become a figurehead for speaking out against racism in football as well as the portrayal of black footballers in the media.

After suffering alleged racist abuse from Chelsea fans during City's 2-0 defeat at Stamford Bridge in December, the England international said in an Instagram post that he "had to laugh" because he expects "no better".

Following the incident, he also claimed that newspapers were helping to "fuel racism" with their coverage of black footballers.

He used an example of the differences in reports about team-mates Tosin Adarabioyo and Phil Foden buying houses.

After the boy's grandmother revealed he had been having a "tough time" because of the abuse, Sterling wrote him a letter.

"Stand tall, don't let them take away your courage," Sterling wrote. "You are strong and very brave and your nanna is also very proud of you. Keep being you kid.

The City winger later met the Newport County academy player after his side's FA Cup fifth-round win at the Welsh side in February.

Following the abuse suffered by England players in their 5-1 win in Montenegro in a Euro 2020 qualifier last month, Sterling spoke out about racism again.

He called on football's authorities to take "a proper stance" and crack down on the problem.

Most recently, Sterling said Leonardo Bonucci's suggestion that Juventus team-mate Moise Kean was partly to blame for the racist abuse he received from Cagliari fans was laughable.

He also arranged for 500 pupils from his old school to attend the FA Cup semi-final between Manchester City and Brighton at Wembley on Saturday.

What others say about Sterling

He said: "I'm so impressed by his maturity and the way he has spoken out on important subjects. It shows huge social conscience.

"He's having another outstanding season and he's risen to every challenge."

England and Tottenham full-back Danny Rose, along with Sterling and Chelsea winger Callum Hudson-Odoi, was the target of racist abuse in Montenegro.

Prior to that game and in reference to Sterling's post on Instagram, Rose said: "Raheem was only saying what we all say in the dressing room.

"The stick he used to get from the media was bang out of order. When he put the [Instagram] post up about the media we were all over the moon with that because we all agree. Fair play to Raheem."

Rose has since said he "can't wait to see the back of football" and is frustrated at the lack of action taken against fans' racism.

Former England captain Rio Ferdinand recently said Sterling does not get the credit he deserves because he is black.

"I think he's alluded to it, that he's judged maybe on the colour of his skin sometimes. I don't think that's too far from the truth," Ferdinand told BT Sport.

"Not only on the pitch is he maturing - off the pitch, how he's carrying himself and conducting himself is a testament to him.

"I think other young players of all cultures can take a note from what he's doing."