Chelsea's Belgian forward Eden Hazard, 28, is set to sign for Real Madrid and his move will be sealed in the coming days. (Marca)

However, Bale has priced himself out of a potential move to Manchester United, as the Premier League side would rather invest in Jadon Sancho, Callum Hudson-Odoi and Declan Rice. (Star)

Barcelona president Josep Maria Bartomeu is planning to hold talks with forward Lionel Messi about extending the Argentine's contract with the club. The 31-year-old's current deal runs until summer 2021. (ESPN)

Bartomeu has hinted the signing of Dutch defender and Ajax captain Matthijs de Ligt, 19, to Barcelona is already a done deal. (Mirror)

And Barcelona are considering the sale of six of their players, including Brazil midfielder Philippe Coutinho, 26, Croatia midfielder Ivan Rakitic, 31, and France defender Samuel Umtiti, 25. (Star)

Everton forward Richarlison's agent says his meeting with Liverpool manager Jurgen Klopp had nothing to do with the 21-year-old Brazil international potentially moving to Anfield. (Sport Witness)

Belgium striker Romelu Lukaku, 25, will discuss his Manchester United future at the end of the season, according his agent. (Sky Sports)

50 not out for brilliant Salah

Chelsea are interested in signing Atletico Paranaense's Brazilian midfielder Bruno Guimaraes, 21, this summer, despite the uncertainty over whether the club will be able to delay or overturn their transfer ban by Fifa. (ESPN)

Manchester United are monitoring Crystal Palace winger Wilfried Zaha, 26, and could make a move to bring the Ivory Coast international back to the club in case they fail to land 19-year-old winger Jadon Sancho from Borussia Dortmund. (Star)

Tottenham, along with Manchester United and Paris St-Germain, want to sign Fulham's England Under-21 winger Ryan Sessegnon this summer. (Mirror)

But it is believed Fulham have put a £40m price tag on Sessegnon, while Tottenham value the player at closer to £25m. (Mail)

Former Huddersfield Town manager David Wagner says he is ready to return to management in the Premier League or Bundesliga if the "right opportunity comes around the corner". (Times - subscription required) 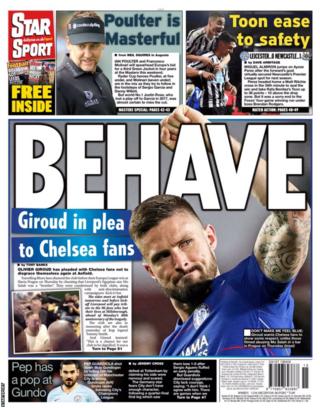