Manchester United will not be forced into selling Spanish goalkeeper David de Gea, 28, this summer - even if they fail to agree a new contract with him and he goes into the final year of his current deal, raising the possibility of him leaving on a free at the end of next season. (Mirror)

Manchester United believe their interest in two England international wingers - Borussia Dortmund's Jadon Sancho, 19, and Chelsea's Callum Hudson-Odoi, 18 - will have to be shelved with their respective clubs maintaining they do not wish to sell. (Mail)

How the Italian media reacted to racist chanting at Moise Kean

Germany forward Andre Schurrle, 28, will become the first casualty of Fulham's relegation by being sent back to Borussia Dortmund a year early. (Sun)

The Cottagers are also likely to lose left winger Ryan Sessegnon, 18, with Tottenham keen on the £50m-rated forward. (Mirror)

Bournemouth have hit a deadlock in talks to extend the contract of Scotland defender Ryan Fraser, 25, with Arsenal tracking the player. (Sun)

Everton have been told to brace themselves for more transfer interest in Senegal midfielder Idrissa Gueye, 29, this summer. (Liverpool Echo)

Former England winger Theo Walcott, 30, could be a high profile victim of Everton's new focus on youth in the transfer market. (Mirror)

Barcelona hope to bring in between 250m and 300m euros in player sales this summer to balance the club's accounts and be able to make signings without risking themselves financially. (ESPN)

Croatia midfielder Mateo Kovacic, 24, would rather stay at Chelsea, where he is on loan, than return to parent club Real Madrid next season. (Goal)

Arsenal have been interviewing candidates for their technical director role, with Ajax's Marc Overmars - a former Gunners winger - and Marseille's Andoni Zubizaretta said to be among the candidates. (Mail)

Chelsea owner Roman Abramovich did not buy corporate boxes at Stamford Bridge before the start of this season for the first time in almost a decade. (The Times - subscription required)

Swansea defender Ben Cabango, 18, could be latest British youngster to head to Germany, with the Wales Under-19 international attracting attention from Bayer Leverkusen and Wolfsburg. (Sun)

West Ham defender Pablo Zabaleta, 34, says he is two games away from triggering a clause in his contract which would give him a new deal to stay next season. (Newham Recorder)

The Premier League and FA plan to introduce new rules to prevent agents from being paid by both club and player in a single transfer. (Mail) 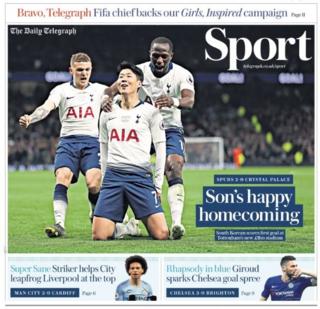 Tottenham's opening night at their new stadium dominated the Telegraph...