Real Madrid manager Zinedine Zidane has told Pogba he wants him at the Bernabeu and insists he does not know why the France international-old would not want to move to the Spanish giants. (Sunday Mirror)

Paris St-Germain will meet David de Gea's wage demands of £350,000 a week and the 28-year-old Spain goalkeeper will leave Manchester United if they do not match the offer. (Sun on Sunday)

Real Madrid are weighing up whether to join PSG in trying to sign De Gea, with Italian club Juventus also keeping an eye on developments. (Sunday Express)

Test your knowledge of the old Old Firm derby

Chelsea do not plan to hold talks with winger Callum Hudson-Odoi until the summer, when the 18-year-old England international will have one year left on his contract. (Mail on Sunday)

Blues boss Maurizio Sarri is Roma's first choice to become their manager for next season. Former Chelsea and Leicester City manager Claudio Ranieri is in charge of the Serie A side, having been appointed until the end of the season following the sacking of Eusebio di Francesco. (Sunday Express)

Manchester United will increasingly focus their transfer policy on younger players, with Crystal Palace's England Under-21 right-back Aaron Wan-Bissaka, 21, one of their main targets. (Mail on Sunday)

Inter Milan have agreed to double the wages of Milan Skriniar, 24, to keep the Slovakia defender from moving to one of a host of Premier League clubs, including Manchester United, Liverpool, Chelsea and Manchester City. (Sunday Mirror)

Leicester are closing in on a £40m deal for on-loan Monaco midfielder Youri Tielemans, amid speculation Tottenham and Manchester United want to move for the 21-year-old Belgian. (Sun on Sunday)

West Ham's England midfielder Declan Rice, 20, has played down the chances of leaving the club this summer, having been linked with Manchester City. (BT Sport, via Manchester Evening News)

Liverpool's 21-year-old Spanish midfielder Pedro Chirivella, who is on loan at Extremadura until the end of the season but cannot play after the deal failed to be ratified in time on deadline day, wants a return to Spain next term. (Liverpool Echo)

Ajax's 19-year-old Netherlands defender Matthijs de Ligt says he could sign for Juventus, amid interest from Liverpool and Arsenal. (Talksport)

Barcelona are willing to listen to offers of over £40m for Croatia midfielder Ivan Rakitic, 31, with Manchester United understood to be interested. (Mundo Deportivo) 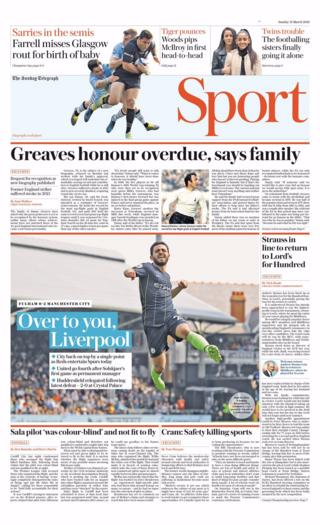 In the Sunday Telegraph, "Over to you, Liverpool"