Barca are prepared to offer more than £100m for the England striker. (Mirror)

The La Liga club sees Rashford as a long-term replacement for Luis Suarez, but United are not willing to sell him. (ESPN)

Chelsea will not sell England winger Callum Hudson-Odoi, 18, even if he refuses to sign a new deal, with Bayern Munich and Manchester United preparing summer bids. (Times)

Arsenal are keen to offload Armenian midfielder Henrikh Mkhitaryan, 30, and Germany's Mesut Ozil, 30, as they try to reduce their huge wage bill. (Mirror)

Barcelona may decide to sell Ivan Rakitic, 30, in the summer, with Manchester United and Inter Milan monitoring the Croatian midfielder's situation. (ESPN)

Atletico Madrid forward Antoine Griezmann says he is "fed up" over speculation about his future. The Frenchman, 28, has been linked with Barcelona and Manchester United. (Univision - in French)

Legacy, retirement and 'his truth' about Man Utd

Louis van Gaal discusses his career and his sacking by Man Utd...

Middlesbrough winger Stewart Downing, 34, has been linked with a move to Rangers, but would prefer a switch to Sunderland - if they win promotion from League One - so the Englishman can stay closer to family. (Record)

Arsenal and Juventus are among the clubs interested in signing 23-year-old Benfica left-back Alejandro Grimaldo of Spain. (Calcio Mercato)

Fiorentina are not interested in permanently signing 27-year-old Belgian winger Kevin Mirallas - who is on loan at the Italian club from Everton.(Corriere Fiorentino via Liverpool Echo)

Spanish goalkeeper Iker Casillas, 37, has signed a new one-year deal with Porto and says he will end his professional career with the club. (Sky Sports)

Yannick Carrasco, a transfer target for Arsenal in January, has said he would "love" to return to Europe. The 25-year-old Belgium winger is currently playing for Chinese side Dalian Yifang. (Star)

Hoffenheim striker Joelinton, 22, is a target for Newcastle United, although the Brazilian would cost more than £40m. (Newcastle Chronicle)

PSV Eindhoven and Feyenoord have been scouting former Arsenal midfielder Dan Crowley, 21, with a view to a summer move after an impressive campaign with Willem II in the Dutch Eredivisie. (Mail)

Charlton manager Lee Bowyer says that midfielder Joe Aribo - who has been linked with Arsenal - is ready to sign a new deal with the League One club. The 22-year-old Englishman has scored 12 goals in 86 appearances for Charlton. (Metro)

Wales and Swansea winger Daniel James says he is talking to the Championship club about signing a new deal. The 21-year-old has been linked with a move to Leeds United. (Independent) 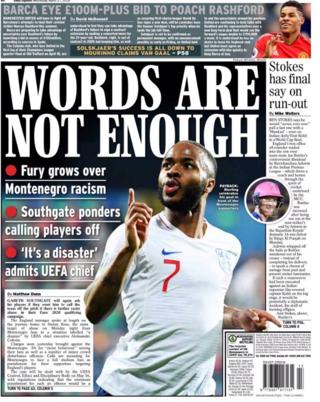