Liverpool are considering letting midfielder Naby Keita, 24, leave the club at the end of the season and will accept a loss on the Guinea international. (Sun)

Real Madrid manager Zinedine Zidane says 23-year-old Spain midfielder Marco Asensio, who has been linked with Liverpool, will not be sold by the club. (Mirror)

Manchester United have been told it will take a record-breaking fee to land England defender Harry Maguire, 26, from Leicester. (Star)

Liverpool will miss out on Ajax and Netherlands defender Matthijs de Ligt as Barcelona president Josep Maria Bartomeu is travelling to seal a deal for the 19-year-old. (Sun)

Norwich City defender Ben Godfrey is a target for Manchester United, with the 21-year-old having been watched by scouts of the Premier League club. (Sun)

Barcelona are not concerned that Dutch goalkeeper Jasper Cillessen, 29, wishes to leave this summer and are confident of finding a replacement. (Marca)

Pints, tears and a new dawn...

Everton and Newcastle are among the Premier League clubs looking at Olympiakos left-back Leonardo Koutris. Leicester and West Ham are also keeping tabs on the 23-year-old Greece international. (TeamTalk)

Gareth Bale would be welcomed back to Tottenham should the 29-year-old Wales international choose to call time on his spell at Real Madrid, says Spurs defender Ben Davies. (Goal)

Norway and Bournemouth striker Joshua King, 27, says Spain and Real Madrid defender Sergio Ramos, 32, has a reputation for "being dirty and rough" but he does not "remember going up against a centre-back as nice as him" after their two countries met in a Euro 2020 qualifier. Spain beat Norway 2-1. (Marca) 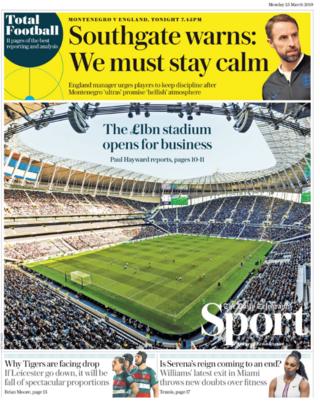 The Telegraph leads with an image of Tottenham's new stadium