Manchester United and Paris St-Germain are both willing to bid £70m for England and Borussia Dortmund forward Jadon Sancho. (Sun)

Barcelona are willing to sell Brazil midfielder Philippe Coutinho if they receive offers of more than £90m, despite the 26-year-old wanting to stay at the La Liga club. (ESPN)

Tottenham are ready to offload Ivorian defender Serge Aurier, 26, and fellow right-back Kieran Tripper in the summer. Everton have renewed their interest in 28-year-old England international Trippier, who has two years left on his Spurs deal and is valued at about £20m. (Sun)

How England are living up to the hype...

Manchester United can sign Real Madrid midfielder Toni Kroos for £50m in the summer. The 29-year-old German agreed to join United from Bayern Munich in 2013, but instead went to Madrid in 2014. (Sun)

Real Madrid have made bringing France and Paris St-Germain forward Kylian Mbappe, 20, to the club a priority. (AS)

Benfica sporting director Rui Costa believes it will be difficult to keep Portuguese forward Joao Felix at the club. Manchester United, Juventus and Liverpool are all interested in the 19-year-old. (Tuttosport - in Italian)

Derby manager Frank Lampard's long-term future at the Championship club is in doubt, with owner Mel Morris looking to reduce costs before he sells the Rams. (Times - subscription required)

Arsenal defender Stephan Lichtsteiner says he is unsure if he will still be at the club next summer, despite the 35-year-old Swiss holding talks over a new contact. (Sky Sports)

Meanwhile, the Gunners are the favourites to sign 22-year-old Ivorian midfielder Franck Kessie from AC Milan. (Tuttomercato - in Italian)

Manchester United midfielder Ander Herrera is hoping to agree a new deal with the club despite interest from Paris St-Germain. The 29-year-old's contract expires at the end of the season. (Telegraph)

United have hit a wall in their contract talks with Herrera and fellow Spanish midfielder Juan Mata, 30. Both want big pay rises to stay at Old Trafford, which United are unwilling to sanction. (Mirror)

Real Madrid's Belgium goalkeeper Thibaut Courtois, 26, says he is still one of the best in the world and accused the Spanish media of "wanting to kill me". (El Espanol via Goal) 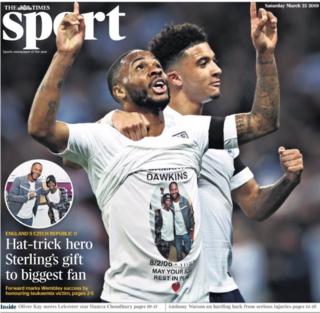 Saturday's sport pages in The Times