Manchester United can chase Borussia Dortmund and England winger Jadon Sancho this summer because his former club Manchester City did not insert any clause in the 18-year-old's contract after selling him stating he could not join their rivals. (Evening Standard)

Dortmund will put a £100m price-tag on Sancho and will move for Chelsea's English winger Callum Hudson-Odoi, 18, if they need to replace him. (Mirror)

Dortmund hope to use Sancho's success at the Westfalenstadion to challenge Bayern Munich for the signing of Hudson-Odoi from Chelsea. (Telegraph)

Barcelona are ready to listen to offers for Philippe Coutinho, 26, with a move to Ligue 1 champions Paris St-Germain most likely. (Goal)

Barcelona have cooled their interest in Atletico Madrid and France forward Antoine Griezmann amid speculation Manchester United will push to sign the 27-year-old. (Mirror)

Lazio are close to a pre-contract agreement with 26-year-old Spanish full-back Alberto Moreno who will leave Liverpool this summer after five seasons at Anfield. (Independent)

Barcelona are preparing a £43m bid for Serbia striker Luka Jovic and hope to start negotiations with Eintracht Frankfurt for the 21-year-old in the next few weeks. (Guardian)

Paris St-Germain's Brazilian right-back Dani Alves, 35, has appeared to deny reports he has agreed a new deal with the Ligue 1 champions. (Goal)

A CV? Presentations? Do shortlists exist?

Chelsea could take Bournemouth's Dutch defender Nathan Ake back to Stamford Bridge amid speculation of interest in the 24-year-old from Napoli and Tottenham. (De Telegraaf - via Caught Offside)

Arsenal will face competition from Bayern Munich in their pursuit of Lille and Ivory Coast winger Nicolas Pepe, 23. (Bein Sports - via Mirror)

Former Manchester United manager Jose Mourinho says he wants to be back in club management by the summer and that he has turned down 'three or four' offers already. (Goal)

Chelsea's French striker Olivier Giroud, 32, is open to a return to France to get more playing time. (Goal) 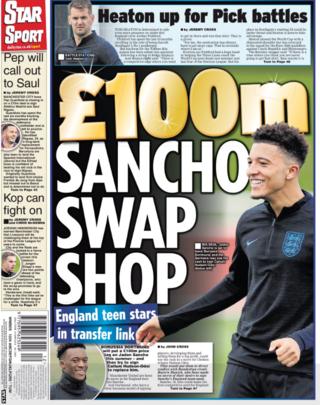 The Star leads on a £100m valuation of Jadon Sancho