Chelsea's Belgian forward Eden Hazard, 28, says he will not be distracted by the mounting speculation he will join Real Madrid in the summer. (Metro)

Real Madrid and Belgium keeper Thibaut Courtois, 26, has turned down a possible move to Manchester United as part of a deal involving Spain's David de Gea, 28, going the other way. (Sun)

Liverpool could be ready to agree a deal to sign Argentine Paulo Dybala, 25, from Juventus in a matter of weeks. (Tutto Mercato, via Team Talk)

Manchester United still have a chance of signing 23-year-old Paris St-Germain midfielder Adrien Rabiot after his mother, who is also his agent, denied a story that suggested the France international had agreed to join Barcelona. (L'Equipe, via Metro)

How much do you know about the Euros?

Manchester United or Arsenal could land Roma's Greek centre-back Kostas Manolas for a cut-price figure this summer. The 27-year-old's release clause will fall if his side do not qualify for the Champions League. (Calciomercato, via Mirror)

Manchester United and Chile forward Alexis Sanchez, 30, has been linked with a move away from the club but says he is determined to succeed and help them win trophies. (Inside United, via Mail)

Olivier Giroud's salary demands could make the 32-year-old Chelsea and France striker too expensive for Marseille or Lyon. (Le10 Sport - in French)

West Ham and Newcastle United are keeping an eye on Mainz attacking midfielder Erkan Eyibil. The 17-year-old from Turkey has been dubbed 'the new Mesut Ozil'. (Turkish Football)

Manchester City's 18-year-old goalkeeper Curtis Anderson, who was in the England squad that won the Under-17 World Cup in 2017, has joined Charlotte Independence in America. (Mail)

New Leicester manager Brendan Rodgers says he expects Croatian defender Filip Benkovic to feature for his side next season. The Foxes loaned the 21-year-old out to Celtic in the summer and Rodgers worked with him before moving from the Scottish champions to the King Power Stadium. (Leicester Mercury)

England striker Harry Kane, 25, insists the squad's players will not let club rivalries cause splits in the camp when they are on international duty. (Times - subscription required)

Derby County owner Mel Morris is considering selling the club for token price of £1 in a deal which would see him aiming to have his debts repaid through the sale process. (Times - subscription required) 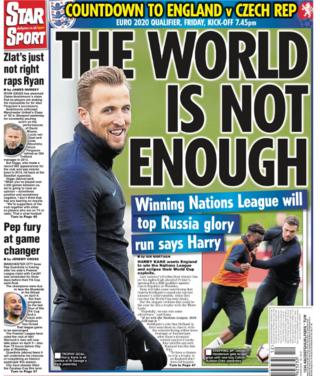