Billionaire Sir Jim Ratcliffe, who is expected to complete a takeover of cycling outfit Team Sky, is still interested in buying Chelsea but has baulked at the £2.5bn asking price. (Times - subscription required)

Real Madrid defender Raphael Varane, 25, is considering his future at the Spanish club, despite the return of fellow Frenchman Zinedine Zidane as manager. (L'Equipe, via Mirror)

Juventus are ready to rival Real Madrid in order to sign Tottenham and Denmark playmaker Christian Eriksen, 27. (Calciomercato, via Mail)

Manchester United could sign Roma and Greece defender Kostas Manolas, 27, for a bargain fee this summer. Manolas has a release clause in his contract of £30.8m. (Calciomercato, via Manchester Evening News)

Newcastle United boss Rafael Benitez has received a written offer to extend his contract at the club beyond this season. (Chronicle)

Manchester United forward Alexis Sanchez, 30, could move to Juventus in the summer, if the Chilean is prepared to drop his current £500,000 a week wages. (Calciomercato, via Express)

United are considering allowing Brazilian midfielder Andreas Pereira, 23, to leave on loan for the whole of next season to gain experience. (Sun)

Arsenal are targeting a summer bid for Portugal international Gelson Martins. The 23-year-old forward is currently on loan at Ligue 1 strugglers Monaco from Atletico Madrid.(A Bola, via Talksport)

The Gunners will send Spanish midfielder Denis Suarez, 25, back to Barcelona this summer when his loan move ends after he failed to impress manager Unai Emery. (Sun)

Arsenal are considering an internal appointment for their technical director role, with former defender Steve Morrow, who is club's head of youth scouting, emerging as an option. (Times - subscription required)

Arsenal are the closest to signing Ituano's 17-year-old Brazilian striker Gabriel Martinelli, who is a target for 25 clubs. (Globo Esporte, via Express)

Can you name every Real Madrid manager this century?

One of them is called Zidane...

The German Football Federation has visited England's St George's Park to gain ideas of how to build their own new training centre and have also been asking about coaching and player development. (Mirror)

Liverpool and Newcastle are both interested in signing 18-year-old Middlesbrough left-winger Bilal Brahimi, although Ligue 1 side Rennes also want the Frenchman. (Teamtalk)

Bournemouth want to sign 20-year-old English Chelsea midfielder Mason Mount, who is currently on loan at Derby, on a season-long loan deal for 2019-20. (Sun)

Aston Villa want to sign French defender Yoann Barbet, 25, although he is in talks with his current club Brentford over a new contract. (Birmingham Mail)

Championship side Ipswich Town are interested in signing Tranmere's 28-year-old striker James Norwood, who has scored 27 goals in all competitions this season. (East Anglian Daily Times)

Ex-Chelsea striker Tony Cascarino believes Newcastle's Salomon Rondon, who is on loan from West Brom, has been the best signing in the Premier League this season. (Talksport) 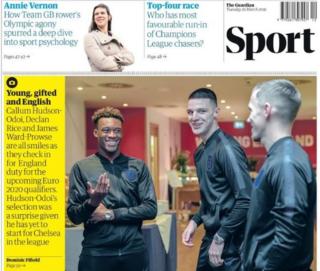