Atletico Madrid forward Antoine Griezmann regrets opting against leaving for Barcelona last summer and is again tempted by a move to the Nou Camp. (L'Equipe - in French)

But although the 27-year-old France international has offered himself to a number of European clubs - including Barcelona - the Catalan club are not interested. (ESPN)

Chelsea owner Roman Abramovich may use the international break to sack manager Maurizio Sarri after a disappointing defeat by Everton on Sunday. (Express)

Bayern's Colombian midfielder James Rodriguez, 27, does not want to remain in Munich beyond his current loan spell from Real Madrid, which finishes at the end of this season. (Marca)

Tottenham's 27-year-old Denmark playmaker Christian Eriksen, whose contract with the London club expires in summer 2020, is a target for Real Madrid and he has dreamed of playing for the Spanish club since he was a child. (Express)

Tottenham scouts were impressed after watching Benfica striker Jota, 19, in the Portuguese side's Europa League win against Dinamo Zagreb. (A Bola, via Sun)

Chelsea could decide not to sell 18-year-old England winger Callum Hudson-Odoi, whose contract runs out in 2020, if they sell Belgium forward Eden Hazard, 28, to Real Madrid this summer. (Sun)

Who are the four super subs?

Find out in Garth Crooks' Team of the Week

Benfica's Portuguese forward Joao Felix says he is happy at the club, despite interest from Manchester United and Chelsea. Liverpool previously had a £61m offer for the 19-year-old rejected. (Marca - in Spanish)

Spurs chairman Daniel Levy says the club's summer transfer plans will not be affected by the cost of their new stadium. (ESPN)

Manager Jurgen Klopp has committed his future to Liverpool after ex-Germany captain Franz Beckenbauer tipped him to take over at Bayern Munich. (Liverpool Echo)

Juventus are prepared to offer Alexis Sanchez, 30, a way out of Manchester United, but would need the Chile striker to take a pay cut. (Calciomercato)

Inter Milan have told Real Madrid they want 80m euros (£68m) for 26-year-old Argentine striker Mauro Icardi, who has not played for the Serie A side since being stripped of the captaincy last month. (AS)

Newcastle are ready to sort out an extension deal with Rafael Benitez as soon as possible because of concerns at new names being linked with the post and the Spaniard being linked to other clubs. (Chronicle)

Arsenal, West Ham and Inter Milan are interested in a move for Manchester United right-back Antonio Valencia when his contract ends this summer, according to the 33-year-old Ecuadorian's father and agent. (El Universo, via Sky Sports)

Barcelona and Uruguay striker Luis Suarez, 32, says former Liverpool team-mate Steven Gerrard, 38, convinced him to turn down a move to Arsenal in 2013 in order to stay with the Reds. (Star)

Proposals to make changes to Champions League qualification and play matches in the competition on a weekend are set to be discussed at a meeting between Uefa and Europe's top clubs on Tuesday. (Telegraph) 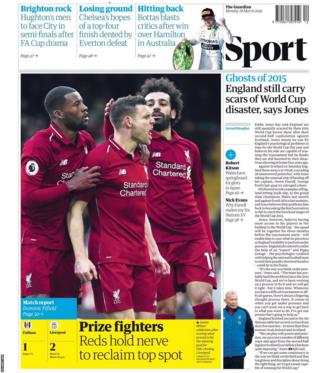