Zidane says no final decision has been made on Belgian goalkeeper Thibaut Courtois' future at the club. The 26-year-old, who was signed after Zidane left the club in May 2018, was dropped for the Frenchman's first match back. (Evening Standard)

Chelsea will attempt to stop 18-year-old Callum Hudson-Odoi's dream transfer to Bayern Munich, if Hazard opts for a move to Real Madrid. The German champions could break the Premier League record fee for a teenager if the winger favours a move to the Bundesliga. (Sun)

Tottenham are preparing a £50m bid for Fulham winger Ryan Sessegnon. The 18-year-old - who has attracted interested from Manchester United and Paris Saint-Germain - has yet to sign a new deal with Fulham. (Sunday Mirror)

Zidane's Real return - what did we learn?

Paris St-Germain have put contract talks with Italian goalkeeper Gianluigi Buffon, 41, Brazilian right-back Dani Alves, 35, and Brazilian defender Thiago Silva, 34, on hold after the French club were knocked out of the Champions League by Manchester United. (L'Equipe - in French)

Former Tottenham boss Harry Redknapp believes Mauricio Pochettino has his "dream job" and that he "doesn't see where he could go that's any better at the moment than managing Tottenham". Pochettino had been linked to a job at either Real Madrid or Manchester United. (Star)

DR Congo want to convince Crystal Palace defender Aaron Wan-Bissaka to play for the national team. The 21-year-old was born in London and is of Congolese heritage. (Independent)

Arsenal are keen to sign Wan-Bissaka, although Palace want £40m for the right-back. (Sun)

Everton manager Marco Silva has told Colombian defender Yerry Mina, 24, he needs to be more consistent if he wants to become a regular in the first team. (Sky Sports)

Barcelona are interested in Celta Vigo's Uruguayan striker Maxi Gomez - but they may not make a move for the 22-year-old as he does not have an EU passport. (Marca - in Spanish)

Sevilla have opened talks with Roma's former director of football Monchi, who has been linked with a move to Arsenal. (Talksport)

Everton's Brazilian forward Richarlison, 21, says he almost quit football as a teenager to "sell ice creams" to help his family out. (Liverpool Echo) 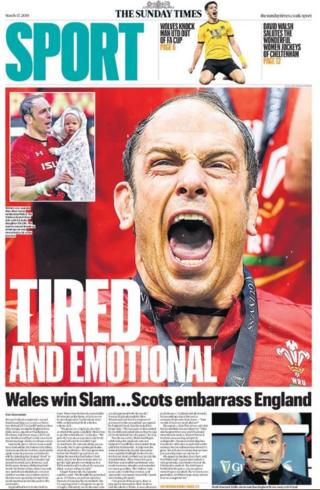 The back page of the Sunday Times