Borussia Dortmund winger Jadon Sancho has been linked with Manchester United but the German club's sporting director, Michael Zorc, says the 18-year-old England international will be playing with the Bundesliga outfit next season. (Mirror)

Manchester United midfielder Paul Pogba, 25, has backtracked on a decision to leave Old Trafford in the summer after talks with interim boss Ole Gunnar Solskjaer. (Sun)

Chelsea forward Eden Hazard has "never said anything about Real Madrid", according to team-mate Willian. The 26-year-old Belgian has been heavily linked with a move to the La Liga club. (Mail)

Manchester City's lack of progress in talks over a new contract with winger Leroy Sane is partly down to the 23-year-old's mother, who is West Germany's 1984 Olympic gymnastics bronze medallist Regina Weber. (Mail)

Hull City's Jarrod Bowen rejected a £12m move to Cardiff City after the Bluebirds attempted to sign him when Emiliano Sala was missing, but not confirmed dead. The 22-year-old forward said the "whole situation was very uncomfortable". (Mail)

Juventus and Real Madrid have emerged as potential destinations for Inter Milan striker Mauro Icardi. The 26-year-old has not featured in a competitive match since being stripped of the captaincy in February. (TyC Sports, via Calciomercato)

Manchester United have been given the green light to sign Tottenham defender Toby Alderweireld - a clause in the 30-year-old's contract could see him leave £26m in the summer. (Mirror)

Who would you choose for England's Euro 2020 qualifiers?

Have a go at picking your England XI

Rafa Benitez will be ordered to sign younger players if he agrees a new contract at Newcastle. The former Liverpool boss is likely to face a battle to make 29-year-old West Brom striker Salomon Rondon's loan permanent. (Mirror)

Real Madrid look set to beat Manchester United in the race for Porto defender Eder Militao's signature. The 21-year-old had been the subject of a rumoured £45m deal. (Sun)

AC Milan have emerged as the frontrunners in the race to sign Argentine midfielder Juan Sebastian Sforza, despite interest from Manchester City and PSG. West Ham, Bayern Munich and Juventus are also reportedly interested in the teenager. (Milan News, via Calciomercato)

Slavisa Jokanovic is yet to hear from West Brom about the vacant managerial position. No formal talks are thought to have taken place. (Mirror) 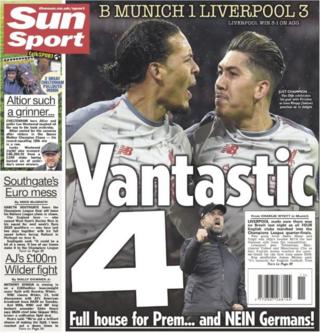 In The Sun, "Full house for Prem... and nein Germans"