Meanwhile, interim boss Ole Gunnar Solskjaer is set to give his defenders a chance to prove themselves by holding off on splashing out £80m on a centre-back this summer. (Sun)

Chelsea are concerned there is nothing they can do to stop Belgian forward Eden Hazard leaving the club for Real Madrid. The Blues are expected to ask for at least £100m to sell the 28-year-old. (ESPN)

Real Madrid are targeting Tottenham playmaker Christian Eriksen, and Spurs may be forced to sell the 27-year-old Denmark international unless he extends his present deal beyond summer 2020. (Mirror)

Team-mate Emerson admitted Chelsea's players are "afraid" of losing Hazard in the summer, but believes the Belgian will stay. "I personally cannot see him leaving, but you never know in football," the defender added. (Sky Sports)

West Ham will make another approach for Celta Vigo forward Maxi Gomez. The Premier League side had an approach for the Uruguayan, 22, turned down in January. (Mirror)

Newcastle United scouts have been watching Roma midfielder Nicolo Zaniolo, 19, as the club plans for next season. (Chronicle)

West Brom's search for a new manager could see them turn to Preston's Alex Neil if talks with former Fulham boss Slavisa Jokanovic break down. (Mail)

Liverpool goalkeeper Loris Karius will remain on loan with Besiktas despite the coach of the Turkish club saying "something is wrong" with the 25-year-old. (ESPN)

Should Pickford's England place be under threat?

Phil McNulty on the increasing scrutiny over England's number one

Karius could take legal action against Besiktas over unpaid wages after going without a salary for four months. (Goal)

Bayern Munich will hold talks with Polish striker Robert Lewandowski over a contract extension. The 30-year-old had been linked with Real Madrid. (Goal)

Arsenal have joined the race to sign Ajax left-back Nicolas Tagliafico. Unai Emery's side join the likes of Real Madrid, Atletico Madrid, Manchester United and Liverpool in the battle for the 26-year-old's signature. (Footy Cosmos)

The impact of Ole Gunnar Solskjaer at Manchester United will persuade young players to join the Old Trafford club, rather than rivals Manchester City, according to former Red Devils defender Rio Ferdinand. (Telegraph)

West Ham midfielder Declan Rice is expected to secure a debut England call-up for the Euro 2020 qualifiers against Czech Republic and Montenegro. (Guardian)

West Ham striker Andy Carroll, whose contract expires in the summer, could have played his last game for the club after suffering an ankle injury which could mean the 30-year-old misses the rest of the season. (Times - subscription required)

The father of Real Madrid goalkeeper Thibaut Courtois has accused the press in Spain and the 26-year-old's native country Belgium of bullying his son. (Independent) 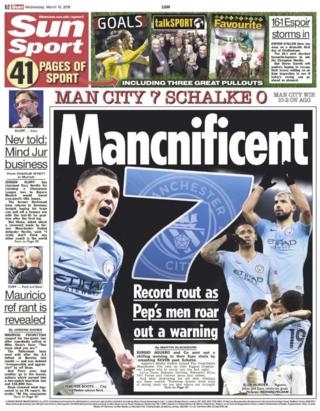 In The Sun, "Mancnificent seven"