Barcelona's 26-year-old Brazil midfielder Philippe Coutinho - who moved to the Nou Camp from Liverpool in January 2018 - has spoken to Manchester United players about a potential £100m switch to Old Trafford. (Sunday Mirror)

Liverpool will offer Netherlands centre-back Virgil van Dijk, 27, a new contract worth £200,000 a week to fend off interest from Barcelona and Real Madrid. (Sunday Express)

Manchester United will give Molde a £6m goodwill gesture when they appoint interim boss Ole Gunnar Solskjaer, who left the Norwegian club to take over at Old Trafford, on a permanent basis. (Sun on Sunday)

Real Madrid could bring in former Chelsea and Manchester United manager Jose Mourinho to replace Santiago Solari as soon as Monday, according to the Spanish club's former chairman Ramon Calderon. (i Newspaper)

How Brendan Rodgers won't be repeating the mistake of his predecessor...

Manchester United will have to compete with Serie A giants Juventus and several other top European clubs to sign Benfica's Portugal Under-21 forward Joao Felix, 19. (Manchester Evening News)

Ajax centre-back Matthijs de Ligt, 19, is open to the possibility of a move to Liverpool - and linking up with Netherlands team-mate Virgil van Dijk. (Goal.com, via Liverpool Echo)

The Gunners are ready to compete with Atletico Madrid and Real Madrid for Ajax for Argentine defender Nicolas Tagliafico, 26. (Sun on Sunday)

Chile forward Alexis Sanchez, 30, will resist any attempts by Manchester United to sell him during the summer. (Sunday Express)

Barcelona plan to offer a new contract to Argentina forward Lionel Messi. The 31-year-old's present deal ends in 2021 but the Spanish champions want to extend it until 2022 or 2023. (Mundo Deportivo - in Spanish)

Bayern Munich are hoping to finalise a deal for Lille and Ivory Coast forward Nicolas Pepe, the 23-year-old who has been a target for Arsenal. (Le10Sport, via Talksport)

The owner of Lille has revealed that he has already rejected offers of over £40m from English clubs for Pepe, who has also been linked with Wolves, Tottenham and Manchester United. (Birmingham Mail)

Blues winger Callum Hudson-Odoi, 18, is being considered for a call-up to the England Under-21 squad. (Mail on Sunday)

The architects behind plans to extend Derby's Pride Park stadium have said they are still in talks with the city council about the project. (Derby Telegraph) 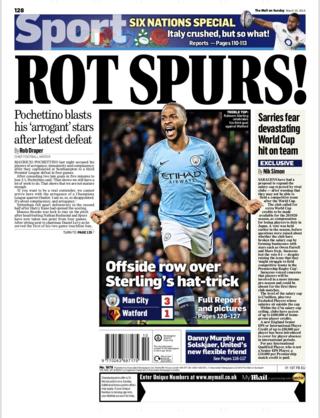