Manchester City boss Pep Guardiola has agreed to replace Massimiliano Allegri at Juventus, according to the journalist who broke the news that Cristiano Ronaldo would move to Turin. (Radio CRC - via Mirror)

Tottenham boss Mauricio Pochettino says he would like to return to coach in Spain in the future and regards the interest in him from Real Madrid as a positive result of his work at Spurs. (ESPN)

Real Madrid left-back Marcelo has agreed terms for a four-year deal to join Ronaldo at Juventus. (La Stampa, via Calciomercato)

Arsenal have moved a step closer to appointing Monchi as their new technical director after Roma announced the Spaniard had left the club. The 50-year-old worked with Gunners boss Unai Emery at Sevilla. (Telegraph)

Liverpool and Crystal Palace were among the clubs who wanted the Premier League to investigate allegations of breaches in financial fair play by Manchester City.(Mail)

Manchester United are watching Benfica and Portugal defender Ruben Dias, 21, as they look to reinforce their defence this summer. (Sun)

Ole Gunnar Solskjaer has suggested he could settle on a partnership of Marcus Rashford and Romelu Lukaku in the Manchester United attack. (Manchester Evening News)

Hornets to win at the Etihad?

Watford winger Gerard Deulofeu, 24, says he is determined to join "a top team" at some stage. (Goal)

Crystal Palace boss Roy Hodgson, the oldest manager in Premier League history at the age of 71, insists he has no thoughts of retirement. (Sky Sports)

Newcastle boss Rafael Benitez admits he is not happy with the way Elias Sorensen's loan deal with Blackpool is progressing, with the 19-year-old Danish forward restricted to only 32 minutes of match action since his loan switch in January. (Newcastle Chronicle)

Benitez insists he is happy at Newcastle as he prepares to mark three years in charge at St James' Park. (Newcastle Chronicle)

Dave Downes and Dean Hughes, who both worked under Steve Bruce during his time at Aston Villa, have joined his recruitment department at Sheffield Wednesday. (Sheffield Star)

Brighton defender Ezequiel Schelotto, 29, on loan at Chievo, has had surgery to reconstruct the anterior cruciate ligament of his right knee after suffering an injury playing at Torino in Serie A last Sunday. (Argus)

Bayern Munich are in position to finalise a deal for Lille's Nicolas Pepe. Barcelona and Paris St-Germain are also interested in the Ivory Coast winger, 23. (Le10 Sport)

Barcelona have been linked with a move for Sochaux midfielder Lucien Agoume, 17. (Mundo Deportivo)

Tottenham and South Korea forward Son Heung-min, 26, agrees with his father that he should not marry until he retires as a player. (Guardian) 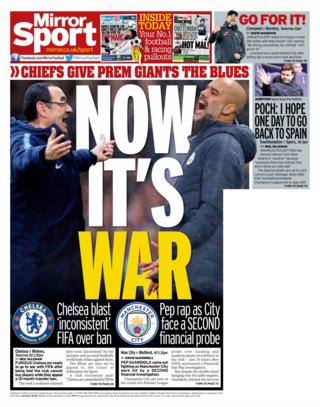 In the Daily Mirror, "Now it's war"