Manchester United interim manager Ole Gunnar Solskjaer will be appointed on a permanent basis by the club on half of the £15m salary of predecessor Jose Mourinho. (Mirror)

Former Chelsea, Leicester and Fulham boss Claudio Ranieri is favourite to take over at one of his former clubs, Roma, after the Serie A side sacked manager Eusebio di Francesco. (Sky Sports)

Former Manchester United manager Jose Mourinho is set to return to Real Madrid until the end of the season. (Goal.com)

Ex-Real Madrid boss Zinedine Zidane, linked with Chelsea, is wanted back by the Spanish club and also by Juventus. (Sun)

Hornets to win at the Etihad?

Juve boss Massimiliano Allegri has revealed talks over his future have been put on hold until the end of the season. (Mail)

Real Madrid's Spanish attacking midfielder Isco, 26, is "enraged" with his manager Santiago Solari and has informed his entourage to make contact with Manchester City. (Calciomercato, via Manchester Evening News)

Manchester United have opened talks with Sporting about signing 24-year-old Portugal midfielder Bruno Fernandes, who has also been linked with Chelsea and Liverpool. (A Bola, via Metro)

Manchester United are considering sending 19-year-old Dutch winger Tahith Chong out on loan for the whole of next season. (Sun)

Former Arsenal manager Arsene Wenger is set to turn down a job working behind the scenes at Paris St-Germain to accept a role as Fifa's head of technical development. (Le Parisien, via Mail)

Middlesbrough midfielder John Mikel Obi, 31, says he "would not say to anyone under the age of 30" to move to the Chinese league, with the Nigerian having spent two years at Tianjin Teda FC before his move to the Riverside club. (Telegraph)

At least 12 top-flight clubs plan to write to the Premier League to ask what action it will be taking over alleged breaches of financial fair play by Manchester City. (Times - subscription required)

DR Congo are trying to beat England in recruiting Crystal Palace right-back Aaron Wan-Bissaka, 21, to play for them at international level. (Mirror)

Tottenham are moving towards their return to White Hart Lane with Haringey Council giving official notice of traffic restrictions in place for test events from the end of next week. (Mail)

Agents in England are set for a confrontation with Fifa over suggestions for a new regulation that would cap their fees and make them payable only by the player they represent. (Telegraph)

Liverpool will look to secure a Premier League loan for Harry Wilson next season - but Brendan Rodgers' arrival at Leicester City may end the Foxes' hopes of signing the 21-year-old Wales winger, who is at Derby County this term.(Goal.com)

Meanwhile, Rodgers has played down rumours that Celtic's head of recruitment Lee Congerton will be joining him at the King Power Stadium.(Leicester Mercury)

Lille owner Gerard Lopez has revealed that it will take a bid of at least £43m to prise away Ivorian winger Nicolas Pepe, 23, while he also denied that sporting director Luis Campos is in talks with Chelsea. (RMC Sport, via Goal.com)

Wolves' Brazilian striker Leo Bonatini, 24, on loan at Nottingham Forest for the rest of the season, wants to stay at the City Ground next term - whether Forest win promotion or not. (Express and Star)

Charlton have received a fresh offer worth £30m from a former banker who has experience of top-level football. (London Evening Standard)

Tottenham's England midfielder Dele Alli, 22, hopes to return from injury at Southampton this weekend, having been sidelined by a hamstring injury since 20 January. (London Evening Standard)

Leicester's English striker Jamie Vardy, 32, will be fit to face Fulham on Saturday after having stitches in his tongue following a heavy collision with Ben Foster in the 2-1 defeat at Watford last weekend. (Leicester Mercury)

Former Brighton defender Inigo Calderon, 37, has returned to his hometown club Alaves, in Spain, as assistant head coach of their B team until the end of the season. (Argus) 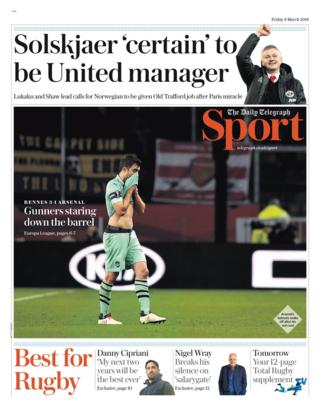