Manchester United's England forward Marcus Rashford, 21, is in advanced talks over an improved, long-term contract that will more than double his wages to £200,000 a week. (Star)

Spurs are also interested in Leicester City's English midfielder James Maddison, 22, as a potential replacement for 26-year-old Denmark international Christian Eriksen, who is a target for Real Madrid. (Express)

Lawro takes on the stars of A Private War

Arsenal are leading the race to sign Benfica defender Alex Grimaldo, 23. Manchester City, Napoli and Inter Milan have all been linked with the Spanish left-back. (Mundo Deportivo - in Spanish)

Juventus' 24-year-old Italy defender Daniele Rugani - who is a target for Chelsea - is set to receive an improved contract until 2023 at the Serie A club. (Calciomercato)

Liverpool and Chelsea are both keen to bring in Brescia's 18-year-old Italy Under-19 midfielder Sandro Tonali, with the Serie B club, who are top of the league, demanding a 50m euro (£43.8m) fee if they are promoted to Serie A this season. (Football London)

Ander Herrera is keen to stay at Manchester United as discussions over a new contract for the 29-year-old Spain midfielder continue. (Independent)

Ireland Under-19 striker Ali Reghba is unlikely to sign a permanent deal at Leicester City, despite impressing during a trial spell at the Premier League club. (Leicester Mercury)

Former Juventus defender Mehdi Benatia, 31, says he chose to join Qatar side Al Duhail over Manchester United because he wanted to raise his family in a Muslim country. (Goal) 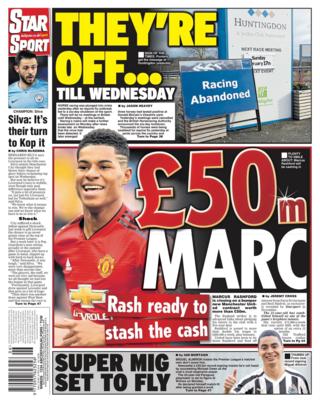