Manchester United are monitoring Borussia Dortmund winger Jadon Sancho, who left Manchester City to join the German club, with a view to making a summer move for the 18-year-old England international. (Metro)

Talks between Schalke and Tottenham for Spurs' Netherlands striker Vincent Janssen, 24, fell through on Thursday. (Football.London)

All of the confirmed January transfer deals

Chelsea manager Maurizio Sarri refused to travel on the team bus following his side's 4-0 loss at Bournemouth on Wednesday. (Mail)

Sarri asked the Blues players if he was the cause of their poor recent away form during a lengthy team meeting following the defeat by the Cherries. (Times - subscription required)

Chelsea forward Eden Hazard was singled out for criticism during the meeting, with Sarri accusing the 28-year-old Belgium international of failing to follow instructions. (Telegraph)

Arsenal's Eddie Nketiah will remain at Emirates Stadium after a potential loan move to Augsburg fell through for the 19-year-old England Under-21 forward. (Football.London)

Liverpool defender Virgil van Dijk said he could sense the nervousness at Anfield during the Premier League leaders' 1-1 draw with Leicester City - but the Netherlands international, 27, added that the anxiety is "not really necessary at the moment". (Guardian)

Tottenham and South Korea forward Son Heung-min, 26, believes his team can beat Liverpool and Manchester City to the title. (Express) 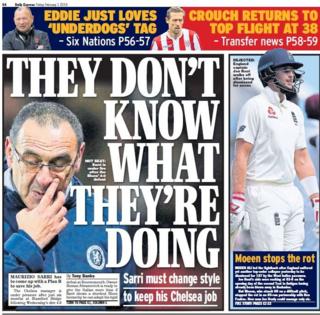 Express back page on Friday