Manchester United are interested in Benfica and Portugal's 19-year-old Joao Felix after sending scouts to watch the midfielder play in his club's 5-1 win over Boavista. (Talksport)

Nigeria striker David Okereke, 21, is wanted by Crystal Palace in a £7m deal from Italian second division side Spezia. (Mirror)

Japan and former Manchester United midfielder Shinji Kagawa, 29, is set to join Monaco from Borussia Dortmund on loan for the rest of the season. (Fox Sports Asia)

But the Toffees are waiting for another offer from Paris St-Germain for Gueye. (Mail)

Arsenal have been linked with a move for Inter Milan winger Ivan Perisic but the Italian club say they have received "no suitable offers". (Mail)

Borussia Dortmund and Juventus are interested in signing Chelsea defender Andreas Christensen but the Blues want a £6m loan fee for the 22-year-old. (Sun)

Arsenal, West Ham and Newcastle United have all made bids to sign 21-year-old Monaco midfielder Youri Tielemans on loan. (Star)

Tottenham have also joined the race to sign Tielemans but could be beaten by Leicester City to the signing of the Belgium international with the Foxes set to offer Adrien Silva, 29, as part of the deal. (Times - subscription required)

Chelsea manager Maurizio Sarri says 18-year-old winger Callum Hudson-Odoi, who handed in a transfer request, should "respect" the club's academy and continue his development at the club. (Guardian)

Everton have rejected interest from AC Milan in striker Ademola Lookman but the Italian club could return with a formal offer for the 21-year-old. (Mirror)

Southampton are in talks with Olympiakos over a deal for Norway defender Omar Elabdellaoui, 27. (Sun)

Real Madrid are targeting 21-year-old Eintracht Frankfurt striker Luka Jovic - who is on loan from Benfica - as a long-term successor to France forward Karim Benzema. (AS)

Paul Pogba's brother Florentin, 28, is set to join Atlanta United in the MLS and resume his career under Frank de Boer. (L'Equipe)

Liverpool are being linked with a bid for Trabzonspor midfielder Abdulkadir Omur, 19, who is attracting interest from across Europe. (iNews)

Liverpool boss Jurgen Klopp says he has not spoken to forward Mohamed Salah about accusations of diving against the 26-year-old, and added that each of the penalties awarded in the Egypt international's favour were the right decisions. (Telegraph)

Has Mourinho been left behind by the modern game?

Arsenal will have to wait until Paris St-Germain sign a second central midfielder before they can look at a move for Frenchman Christopher Nkunku, 21. (Get French Football via Express)

Newcastle United are in talks to sign midfielder Andreas Samaris, 29, on loan from Benfica. (Chronicle)

Aston Villa striker Scott Hogan, 26, is poised to move to Sheffield United on loan until the end of the season. (Express and Star)

Porto are set to abandon their pursuit of Celtic's former France Under-21 midfielder Olivier Ntcham, 22. (A Bola via Daily Record) 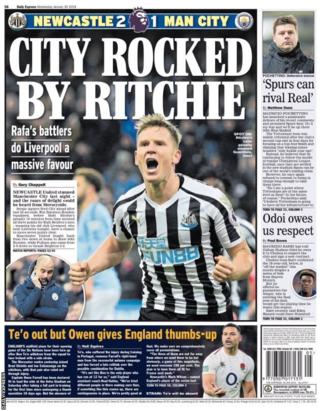