Real Madrid and Spain midfielder Isco, 26, has played down the prospect of a move to Chelsea in January by saying he will not be leaving the Bernabeu during the transfer window. (Deportes Cuatro, via Metro)

Liverpool and England striker Dominic Solanke, 21, has had a medical at Crystal Palace as he nears a loan move. (Mail)

Lille and Ivory Coast winger Nicolas Pepe, 23, who has been linked with Arsenal, Barcelona and Manchester City, appears open to a move next summer. (Le Voix du Nord, via Star)

Liverpool - from hunter to hunted

'When you get in front you have to enjoy it, not be looking over your shoulder'

Chelsea's French midfielder Tiemoue Bakayoko, 24, says he is open to staying at AC Milan at the end of his season-long loan at the Italian club. (MilanNews, via Mail)

Arsenal and Egypt midfielder Mohamed Elneny, 26, has been told to leave the Gunners on loan in January in order to force his way into manager Unai Emery's long-term plans. (Standard)

Fulham may sell French striker Aboubakar Kamara, 23, after he ignored manager Claudio Ranieri's orders and insisted on taking a penalty - which he missed - against Huddersfield on Saturday. (Times)

West Brom are closing in on a deal to sign Everton's 22-year-old English defender Mason Holgate on loan in January. (Express & Star)

Middlesbrough hope to sign Huddersfield's Dutch midfielder Rajiv van La Parra, 27, on loan with a view to a permanent deal in the summer. (Yorkshire Post)

Manager Brendan Rodgers says Celtic have work to do in the January transfer window to bring in new players. (Irish Times, via Celtic TV)

Assistant manager Steve Holland says England did not handle the 2018 World Cup semi-final in Russia as well as they could have done. (Telegraph) 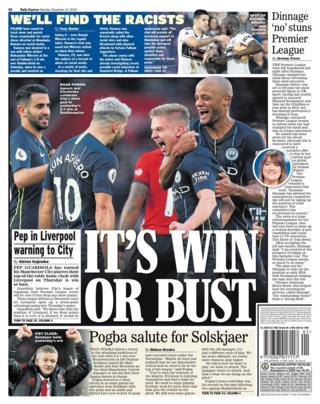