Chelsea have made an offer in excess of £45m to sign Borussia Dortmund attacking midfielder Christian Pulisic next summer, but the German club will delay any decision as they wait for rival offers for the 20-year-old USA international. (ESPN)

Newcastle manager Rafael Benitez is considering a move for Leeds striker Kemar Roofe, 25, if he is given funds in January. (Sunday Mirror)

Chelsea have been told they must pay £30m if they want to sign Bayern Munich's Germany centre-back Mats Hummels, 30, in January. (Sun on Sunday)

Juventus boss Massimiliano Allegri has denied suggestions he wants to become the new Manchester United manager in the summer. (Mail on Sunday)

Watford boss Javi Gracia says it does not surprise him that Abdoulaye Doucoure, 25, is being linked with a move and, although he expects the Frenchman to stay for a "long time", he knows sometimes "something happens you don't want". (Independent)

Cardiff are leading the race to sign Liverpool right-back Nathaniel Clyne, although Fulham and Leicester are also keen on the 27-year-old England international. (Sunday Mirror)

Liverpool are interested in Trabzonspor's Turkish attacking midfielder Abdulkadir Omur, 19, but face competition from Manchester City and Roma. (Fotomac, via Star on Sunday)

Tottenham are in talks with NFL side Oakland Raiders over a ground share at Spurs' new stadium next season. (Mail on Sunday) 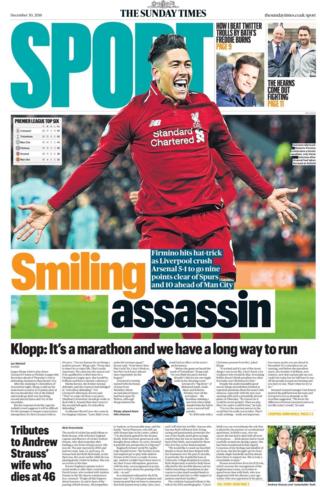 The front page of the Sunday Times sport supplement