Former Manchester United midfielder Roy Keane says it would be "no big deal" if Paul Pogba was sold on this summer after the French midfielder, 25, was left on the bench for the defeat by Liverpool at Anfield. (Sky Sports)

Manchester United manager Jose Mourinho says he was right not to use Paul Pogba during his side's defeat at Liverpool.(Times - subscription required)

Jose Mourinho could be offered an escape route out of Manchester United by former club Inter Milan, with the Italian club considering parting company with current coach Luciano Spalletti next summer. (Express)

Wolves striker Raul Jimenez, who is on a season-long loan from Benfica, says he is playing to convince the club to activate a transfer that would make him the Molineux outfit's first £30m player. (Times - subscription required)

Arsenal manager Unai Emery says the club "do not have a lot of possibilities" in the January transfer window "but we are going to look". (Mail)

Barcelona have put together a seven-player shortlist of strikers to replace 32-year-old Luis Suarez. (Mundo Deportivo via Mirror)

What's the format and who are the favourites?

Real Madrid legend Iker Casillas criticised Manchester United boss Jose Mourinho after his team's defeat at Liverpool asking: "At what point do you see that coaches are no longer to lead a team or train?" (Mirror)

A number of English clubs are watching 21-year-old London-born striker Ronald Sobowale - the cousin of Bayern Munich star David Alaba - who is currently playing in non-league football in England. (Mail)

Cardiff City boss Neil Warnock says he will try to improve his squad in "two or three positions" in January. (Sky Sports)

Bournemouth boss Eddie Howe says he is considering "having a look" at reinforcing his squad in January - but has made no guarantees they would find better players than they already have. (Bournemouth Daily Echo)

Chelsea chairman Bruce Buck greeted the club's away fans at Brighton on Sunday and spoke to them to try to prevent a repeat of the alleged racism and anti-semitism which had marred their previous two games. (Guardian)

Tottenham manager Mauricio Pochettino says he wants to "kill" any bad behaviour and racism. He was speaking before his side's League Cup quarter-final against Arsenal on Wednesday and following a banana skin being thrown on to the pitch by a Spurs fan when they met earlier this month. (Guardian)

Real Madrid keeper Thibaut Courtois, 26, says his former Atletico Madrid manager Diego Simeone criticises the Bernabeu side to gain popularity among his own fans. (AS) 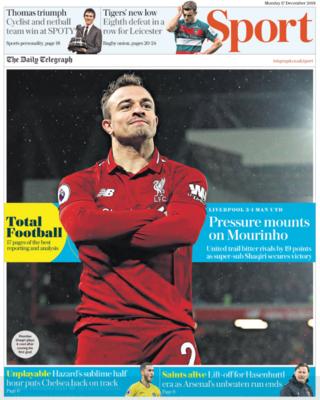