Tottenham are hoping to prevent Everton from turning Andre Gomes' loan into a permanent move by making a bid for the 25-year-old Barcelona and Portugal midfielder. (Sun)

Arsenal boss Unai Emery admits he may have to sign a centre-back in January because of a defensive injury crisis at the Emirates Stadium club. (Mail)

Manchester United's Spain goalkeeper David de Gea is set to sign a new contract which could be worth £400,000 a week with bonuses. (Sun)

'The Klopp of the Alps'

Newcastle owner Mike Ashley is confident that a £300m deal to sell the club will be finalised in the new year. (Express)

Magpies manager Rafael Benitez has been given assurances he will be given money to sign new players in January, regardless of whether or not the club is sold. (Chronicle)

Manchester United boss Jose Mourinho is growing increasingly angry at the Old Trafford club's board over a lack of transfer activity. (Telegraph)

The Red Devils are considering making a record-breaking bid for 27-year-old Napoli centre-back Kalidou Koulibaly, with the Italian side wanting £100m for the Senegal international. (Evening Standard)

Ajax and Netherlands midfielder Frenkie de Jong, 21, insists he has not yet made a decision on his future, despite being linked with Paris St-Germain and Barcelona. (Voetbalzone - in Dutch)

Meanwhile, the Foxes will compete with Leeds and Athletic Bilbao for Alaves' 29-year-old Spanish winger Ibai Gomez. (AS, via Sport Witness)

England left-back Danny Rose, 28, does not expect Tottenham to strengthen their squad in January. (Independent)

PSV Eindhoven manager Mark Bommel has asked former Netherlands team-mate Arjen Robben about returning to the Dutch side, with the 34-year-old winger set to leave Bayern Munich at the end of the season. (Omroep Brabant - in Dutch)

Wolves and Mexico striker Raul Jimenez, 27, will decide at the end of the season whether to make his loan move to Molineux permanent. (Express and Star)

But Barca and Alba are still not close to sorting out a new deal, with the 29-year-old's contract expiring at the end of the season. (AS)

Cardiff striker Ibrahim Meite, 22, is set to leave in January, with Watford and West Brom interested in the Englishman, as well as clubs in Russia, Germany and France. (Mail)

Leeds United midfielder Samuel Saiz is being linked with a move to Getafe as the 27-year-old Spaniard is unsettled at Elland Road. (Yorkshire Evening Post)

Spain midfielder Isco's future at Real Madrid is in doubt after the 26-year-old reacted angrily to unhappy home fans during his side's 3-0 Champions League defeat by CSKA Moscow. (Mundo Deportivo - in Spanish) 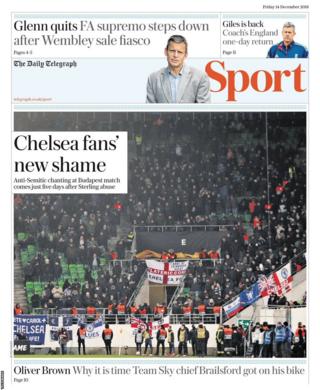