LA Galaxy are set to re-sign Ibrahimovic to a new deal, after speculation he could return to AC Milan. (ESPN)

Manchester City and Belgium centre-back Vincent Kompany, 32, is a target for Barcelona. (Sun)

France midfielder Paul Pogba, 25, has been shocked at being dropped by Jose Mourinho, with the Manchester United player left out of the starting XI for the past two games. (Guardian)

A former advisor to Mourinho has claimed the Manchester United manager never wanted Pogba at the club. (Record via Sun)

How chain-smoking Sarri made it to Stamford Bridge

Newcastle are ready to move for Benfica's Andreas Samaris when the transfer window reopens. The 29-year-old Greece midfielder was a summer target. (Mirror)

Manchester United's Spain midfielder Juan Mata, 30, says he is "very happy" to be at Old Trafford as talks continue about extending his contract at the club. (Manchester Evening News)

Leicester City are not planning to sign any new players in the January transfer window, with manager Claude Puel happy with the squad. (Leicester Mercury)

Shanghai SIPG manager Vitor Pereira is among the names being considered for the Reading job. (Sky Sports)

Former France winger Franck Ribery, 35, is set to leave Bayern Munich at the end of the season, according to the German club's sporting director Hasan Salihamidzic. (Bild - in German)

Valencia manager Marcelino has suggested the Spanish club are unlikely to take up the option to buy Belgium striker Michy Batshuayi, 25, on loan from Chelsea. (FourFourTwo)

Galatasaray have had an offer to sign Liverpool and Belgium striker Divock Origi on loan turned down because the Premier League club want the 23-year-old to stay closer to England. (ESPN)

Wolverhampton Wanderers' £20m approach for Japan midfielder Shoya Nakajima, 24, has not yet been successful, according to the vice-president of Portuguese club Portimonense. (Birmingham Mail) 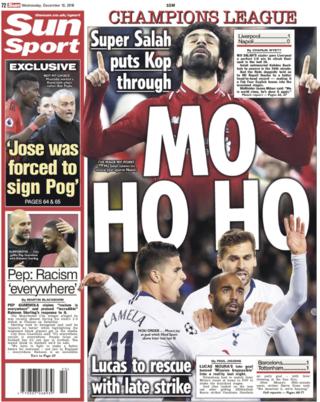 The Sun leads on Champions League progress for Liverpool and Tottenham