France forward Ousmane Dembele, 21, has asked to leave Barcelona in the January transfer window and his departure could allow 26-year-old Brazil striker Neymar to return to the Nou Camp from Paris St-Germain. (Goal)

Manager Marco Silva says Everton plan to test Barcelona's resolve over a permanent move for 25-year-old midfielder Andre Gomes, who is on a season-long loan at Goodison Park. (Liverpool Echo)

Chelsea's Belgium forward Eden Hazard has ruled out a move to Paris St-Germain, but the 27-year-old says he could leave Stamford Bridge this summer. (Canal+, via Goal)

A look at a new formation for Arsenal and a potential new role for Chelsea's midfielder...

Manchester United sent scouts to watch 19-year-old West Ham defender Declan Rice - who qualifies for both England and the Republic of Ireland - in the Hammers' 4-0 defeat by Manchester City on Saturday. (Metro)

Southampton intend to give manager Mark Hughes time to turn the club's form around, despite the Saints only winning once this season. (Telegraph)

Barcelona's Spain left-back Jordi Alba says he has not been offered a new contract at the club, leaving the 29-year-old's future uncertain. (ESPN)

Manchester United may wait to sign 22-year-old Roma midfielder Lorenzo Pellegrini after discovering a release clause can be triggered at the end of the season. (Mirror)

Newcastle manager Rafael Benitez says he will not rule out a return to Serie A in the future if he is unable to win trophies at St James' Park. (Newcastle Chronicle)

Chelsea and Brazil defender David Luiz, 31, says Blues manager Maurizio Sarri has been angrier after victories than after Saturday's 3-1 defeat by Tottenham. (Mirror)

Everton and Republic of Ireland right-back Seamus Coleman, 30, has described his side's record against Liverpool as "embarrassing" before next weekend's Merseyside derby. (Express)

Santos' Brazilian striker Gabriel Barbosa, 22, could be ready for a new challenge with the Toffees after a disappointing loan spell at Inter Milan.(Tutto Mercato Web - in Italian)

Sweden defender Mikael Lustig, 31, is set for talks to decide if he has a future at Celtic.(Daily Record)

Leicester captain Wes Morgan, 34, has called for talks with referees over the inconsistency of decisions. (Leicester Mercury) 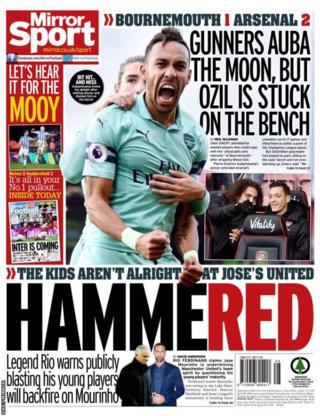