Juventus could face a challenge in their bid to bring United's Paul Pogba, 25, back to Italy - with Inter Milan also considering a move for the France midfielder. (Tuttosport - in Italian)

Facts and figures from the Premier League on Saturday...

Newcastle manager Rafael Benitez is a target for Chinese club Guangzhou Evergrande. The Spaniard is in the final year of his contract at St James's Park. (Sun on Sunday)

However, the Magpies boss, 58, has insisted he is not considering a move away from Tyneside. (Sunday Mirror)

Benitez will be contacting the Football Association to seek an explanation because he feels he has been treated differently to Manchester City manager Pep Guardiola over comments made about referees. (Sunday Telegraph)

Columbus Crew and USA goalkeeper Zack Steffen, 23, could be brought in by Manchester City as a back-up to Brazil international Ederson, 25. (Sun on Sunday)

Guardiola says Brazil midfielder Fernandinho, 33, will need to be rested during City's busiest stretch of the season. (Manchester Evening News)

Chelsea believe Belgium forward Eden Hazard will leave Stamford Bridge, and they have already started planning for life without the 27-year-old. (OK Diario - in Spanish)

Southampton boss Mark Hughes says chants from Saints fans about his future at the club during Saturday's 3-2 defeat by fellow strugglers Fulham were "predictable". (Mail on Sunday)

AC Milan's Argentina striker Gonzalo Higuain, 30, could be going back to Juventus at the end of the season. The 30-year-old moved on loan in August but budget concerns mean Milan may not take up their option to pay 36m euros (£32m) to make the deal permanent. (Corriere dello Sport - in Italian)

Inter Milan and Wolves are interested in signing Manchester City's French centre-half Eliaquim Mangala, 27, on a free transfer next summer. (Sun on Sunday)

Wolves are also considering a move for Monaco winger Keita Balde, who is on loan at Inter Milan - but West Ham are also interested in the 23-year-old Senegal international. (Birmingham Mail)

The Molineux club's board has held a meeting and decided that Wolves midfielder Ruben Neves is "100% not for sale" in January. Arsenal,Manchester City and Juventus are thought to be interested in the 21-year-old Portugal international. (Sunday Telegraph)

Arsenal legend Alan Smith claims it would be "no surprise" if Unai Emery decides to sign a new centre-back in the near future. (Standard)

Spanish giants Barcelona have become the first sports team in history with average basic first-team pay of more than £10m a year. (Mail on Sunday)

Liverpool and England striker Dominic Solanke, 21, will not be joining Rangers on loan in January. (Talksport) 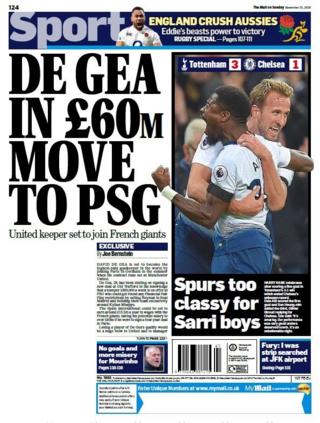