Manchester City will have to pay a club record £75m for Ajax and Netherlands midfielder Frenkie de Jong, who is also wanted by Barcelona. The 21-year-old is a key target for City boss Pep Guardiola. (Mirror)

France midfielder N'Golo Kante, 27, is ready to sign a new Chelsea contract worth around £300,000-a-week. (Telegraph)

Real Madrid are trying to convince Spanish midfielder Brahim Diaz, 19, not to renew his contract with Manchester City. (AS)

Spanish midfielder Juan Mata, 30, plans to take his time before deciding whether or not to commit his future to Manchester United. (ESPN)

Chelsea face the prospect of Ruben Loftus-Cheek, 22, asking to move on loan in January after renewed interest in the England midfielder from Crystal Palace and Schalke. (Times - subscription required)

Paris St-Germain midfielder Adrien Rabiot, 23, has told Barcelona he will sign for the club in the summer. (Mundo Deportivo - in Spanish)

Leicester City are keen on signing Arsenal's 26-year-old Egypt midfielder Mohamed Elneny, who has yet to play a Premier League game this season. (Leicester Mercury)

French club Nice want to sign Liverpool's Belgium goalkeeper Simon Mignolet in January but the 30-year-old is set to remain at Anfield for the rest of the season. (Liverpool Echo)

LA Galaxy striker Zlatan Ibrahimovic, 37, will join AC Milan in January, earning two million euros (£1.7m) for half a season, with an option for another year. (La Gazzetta dello Sport - in Italian)

Everton's Croatia midfielder Nikola Vlasic, 21, is to remain at CSKA Moscow on loan despite interest from Inter Milan and Roma who want to sign him on a permanent deal. (ESPN)

Wolves held talks with the representatives of Senegalese striker Mbaye Diagne, 27, over a January transfer move from Turkish side Kasimpasa. (ESPN)

Manchester United have inadvertently announced the signing of Paul Woolston, 20, after the English goalkeeper, who has been released by Newcastle, was spotted in training with Jose Mourinho's first-team squad. (Metro) 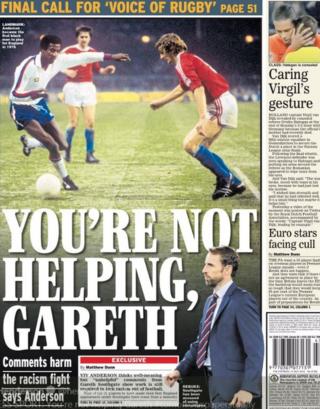