The Serie A side have asked Manchester United to keep them updated about Pogba's future at the club during informal talks in Turin. (Metro)

Juventus are compiling a dossier on England international Marcus Rashford, 21, as they firm up their interest in the Manchester United striker. (Times - subscription needed)

Arsenal have targeted a January move for Spain international Pablo Fornals, 22. The Villarreal midfielder has a £17.8m release clause in his contract. (Sun)

US midfielder Christian Pulisic, 20, will leave Borussia Dortmund for the Premier League, but the Chelsea and Liverpool target will come in the summer rather than January. (Mirror)

France striker Olivier Giroud, 32, has ruled out a move away from Chelsea, warning that he is prepared to fight for a starting role at Stamford Bridge. (Mail)

Liverpool are targeting current Bundesliga top goal scorer Luka Jovic - but they face competition from Barcelona and Bayern Munich for the 20-year-old Frankfurt and Serbia striker. (Bild - in German)

Barcelona have watched Genoa and Poland striker Krzysztof Piatek, 23, and Ivory Coast and Lille striker Nicolas Pepe, 23, as well as Serbia and Frankfurt striker Jovic, this season as they begin to think about a long-term replacement for 31-year-old Uruguay striker Luis Suarez. (ESPN)

Barcelona have given French forward Ousmane Dembele, 21, an ultimatum to either change his lifestyle - or leave the club. (Sport - in Spanish)

Uefa could introduce VAR for the Nations League semi-finals in June 2019. (Evening Standard)

Manchester United have made an offer of £80m for Napoli's Senegal central defender Kalidou Koulibaly, 27. (TyC via Manchester Evening News)

Belgium midfielder Marouane Fellaini, 30, says Manchester United are not far off Manchester City, despite trailing them by 12 points in the Premier League. (Sky Sports)

Britain's most promising young footballers could be denied moves to foreign clubs after Brexit, with current Fifa rules stating it is forbidden for players under 18 to be sold to overseas clubs outside of the European Union. (Telegraph)

Manchester United agreed to a friendly that never happened with Monaco to ensure the Ligue 1 club received a £3.5m bonus for the loan signing of Colombia forward Radamel Falcao, 32. (Mediaset, via Mail)

Hull City owners Assem and Ehab Allam remain confident a takeover can be completed inside the next month. (Hull Daily Mail) 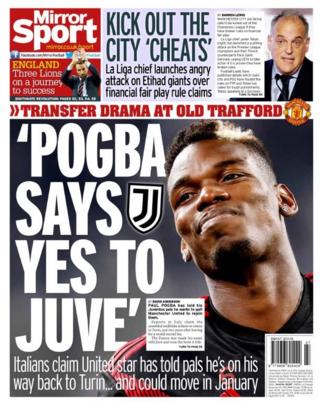