Manchester United are prepared to double the salary of Roma's 22-year-old Italy midfielder Lorenzo Pellegrini, who has been linked with a £26m move to Old Trafford. (Corriere dello Sport, via Football Italia)

Concerns outgoing Premier League chairman Richard Scudamore would take a job with La Liga were behind his £5m payoff from top-flight clubs. (Telegraph)

Real Madrid are ready to sign a striker in January after losing faith in Wales international Gareth Bale, 29, and France's Karim Benzema, 30. (Sport, via Express)

Why England's win against Croatia was one to savour...

Barcelona will look to sign a central defender in January because of concerns over the fitness of France international Samuel Umtiti, 25. (AS)

West Ham forward Marko Arnautovic, 29, would not be drawn on rumours linking him with a move after coming off the bench for Austria in their 2-1 win over Northern Ireland. (Metro)

France forward Antoine Griezmann says it was "very difficult" to turn down Barcelona in the summer, but the support he received at Atletico Madrid helped persuade him to stay. (Goal)

Former Arsenal manager Arsene Wenger fears it is only a matter of time before Twitter polls are used to make substitutions during matches. (Bein Sports, via Mirror)

Blackburn Rovers striker Danny Graham, 33, is close to extending his contract for another year. (Lancashire Telegraph)

Former Manchester United and England midfielder Paul Scholes, 43, has been dropped by 11th-tier Royton Town now they are back to full strength. (Sun) 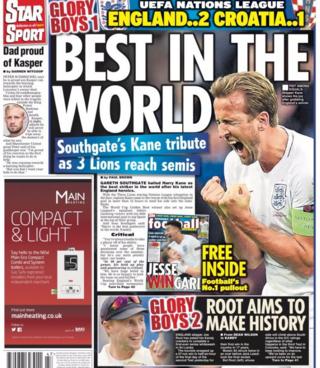