Chelsea are set to sign Borussia Dortmund's 20-year-old United States winger Christian Pulisic - and will push for the deal to be concluded in January. (Mail)

Napoli's Albania full-back Elseid Hysaj, 24, could also be a target for Chelsea, according to his agent. (Radio CRC, via Sun)

Wolves want Origi on a permanent deal, and are lining up a £20m January bid. (Mirror)

Tottenham have been warned that their new stadium may not be ready until March because of issues at the site. (Times)

Real Madrid's Colombia winger James Rodriguez could move to the Premier League next summer. Bayern Munich have opted against a permanent move for the 27-year-old, who is in the second year of a two-season loan. (Mirror)

What next for Lionel Messi?

The 'alien' who keeps evolving...

Barcelona insist they have no intention of selling 21-year-old France winger Ousmane Dembele, and say they have had no offers for him. (Cadena Ser, via Evening Standard)

Arsenal are keeping tabs on 18-year-old centre-back Sebastian Walukiewicz, who plays in his native Poland for Pogon Szczecin. But the Gunners face competition from La Liga giants Barcelona. (Football London)

Arsenal defender Julio Pleguezuelo, 21, says he has had offers to return to Spain but wants to stay at the Emirates. (Marca - in Spanish)

New Fulham manager Claudio Ranieri impressed club bosses by detailing where the team was failing and where improvements could be made in his interview for the job. (Mail)

Juventus have made an offer for Toulouse's 18-year-old French defender Jean-Clair Todibo. (Calciomercato)

Roma's Czech Republic forward Patrik Schick, 22, wants to stay at the club and has denied reports he might leave on loan in January. (Gazzetta dello Sport)

Manchester United captain Antonio Valencia, 33, says he has been dropped by manager Jose Mourinho and is not injured. (Area Deportiva, via Mail)

Porto's former Spain goalkeeper Iker Casillas, 37, said he would return to the national team and Real Madrid if either wanted him. (Movistar, via Marca)

Liverpool's England midfielder Alex Oxlade-Chamberlain, 25, is targeting a comeback from his knee injury before the end of the season. (BetVictor, via Liverpool Echo)

Republic of Ireland are keen to add Brighton coach Liam Rosenior to their under-21 set-up. (Mirror)

Leeds United owner Andrea Radrizzani has promised to take his players to Las Vegas if they win promotion to the Premier League. (Mail) 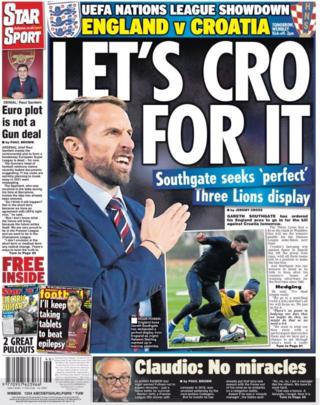