Real Madrid are ready to move for one of Paris St-Germain's two key forwards if the French club have to sell players because of Financial Fair Play. Brazil's Neymar, 26, and France international Kylian Mbappe, 19, have long been targets for Real. (AS - in Spanish)

Fifa is investigating five Premier League clubs over possible violations of rules on the signing of foreign players under the age of 18, with the teams in question facing potential transfer bans if found guilty. (Guardian)

West Ham have blocked any move for Austria striker Marko Arnautovic, 29, in January after he said he was the subject of interest from Manchester United in the summer. (Star)

Can Claudio lift the clouds?

Everton want to sign Manchester United and England centre-back Chris Smalling, 28, when his contract expires at the end of the season. (Sun)

Bournemouth striker Jermain Defoe, 36, is wanted on loan by Championship club Sheffield United, after he has been restricted to four appearances in the Premier League this season. (Star)

Manchester City and England Under-21 midfielder Phil Foden, 18, is on the verge of signing a new six-year contract. (Telegraph)

Chelsea are willing to listen to loan offers for 32-year-old central defender and captain Gary Cahill, whose contract runs out at the end of the season. (Mail)

Chelsea's France midfielder N'Golo Kante, 27, refused to have part of his salary paid through an offshore company. (Times - subscription required)

Roma are preparing a bid for Manchester United and England full-back Ashley Young, 33, in January. (Sun)

Wolves are keen to sign 28-year-old Argentina defender Marcos Rojo, who will be allowed to leave Manchester United in January. (Birmingham Mail)

Owner Mike Ashley is in talks to sell Newcastle in a £350m deal with a US investor. (Mirror)

Agent William Salthouse, whose clients include Wilfried Zaha and Glenn Murray, has been criticised by a gambling addiction charity after taking payments from bookmakers. (Mail) 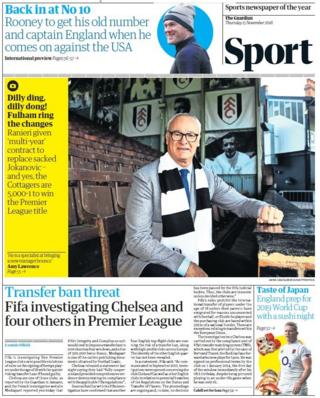