Manchester United manager Jose Mourinho faces the sack if he fails to guide them to Champions League qualification this season. (Sun)

Mourinho's continued selection of 30-year-old Serbia midfielder Nemanja Matic has been questioned by some of his Manchester United team-mates. (Times - subscription required)

Former France midfielder Samir Nasri's move to West Ham is at risk of breaking down because of concerns over the 31-year-old's fitness. (Daily Mirror)

The deal could also break down because of Nasri's pay demands, with West Ham not keen to match his £95,000-a-week pay demands. (Mail)

Santiago Solari will be appointed Real Madrid manager until the end of next season. (Marca - in Spanish)

Former Chelsea boss Antonio Conte says he will wait until the summer before taking a new job in management. (Rai Sport via Goal)

Conte's decision to wait means Chelsea face the prospect of paying him £11m in compensation - the full amount owed for what would have been the final year of his contract. (Daily Mirror)

Is there a gulf in class?

Anti-racism charity Kick It Out has asked for an explanation from West Ham after the club reinstated Under-18s coach Mark Phillips, who was suspended after attending a Democratic Football Lads Alliance march. (Telegraph)

Premier League clubs would be allowed a maximum of 12 overseas players in their 25-man squads under new Football Association plans preparing for Brexit. (Times)

UAE club Al-Jazira want to appoint Michael Reiziger as coach. The former Ajax, Barcelona and Middlesbrough defender, 45, is currently in charge of Ajax's reserve side. (De Telegraaf - in Dutch) 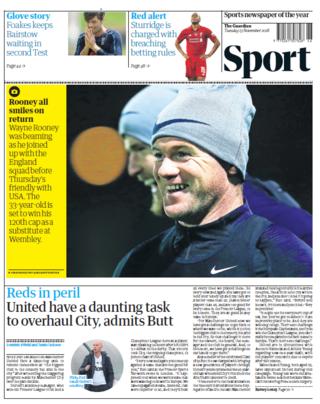