Manchester City are lining up a £50m summer move for Ajax's 21-year-old Netherlands midfielder Frenkie de Jong, despite the threat that the club could face investigations over their finances. (Mail)

Manchester United midfielder Fred, 25, has been confiding about his struggles at the club with 33-year-old fellow Brazil international Fernandinho, who plays for rivals Manchester City. (Metro)

Manchester City boss Pep Guardiola says he confronted forward Raheem Sterling after the 3-1 derby win over Manchester United because of the 23-year-old England international's showboating in the closing stages. (Express)

Everton, Newcastle and West Ham are interested in signing 28-year-old Algeria winger Yacine Brahimi, whose contract with Porto runs out next summer. (Sun)

'Mourinho deluded if he can't see gulf in class'

Arsenal manager Unai Emery could give 19-year-old England Under-21 international Eddie Nketiah a chance before deciding whether to sign a forward to replace injured Englishman Danny Welbeck, 27, in January. (Express)

Everton have an injury concern over 29-year-old Iceland midfielder Gylfi Sigurdsson, who left Stamford Bridge in a protective boot following a challenge by Chelsea and Italy midfielder Jorginho in the goalless draw between the two sides. (Sun)

Aleksandar Mitrovic's goal for Fulham against Liverpool was rightly disallowed for offside but Mohamed Salah's opener for the Reds should also not have been given because the ball was moving when keeper Alisson took the free-kick which led to it, according to former Premier League referee Mark Clattenburg. (Mail)

Liverpool manager Jurgen Klopp is in talks with England manager Gareth Southgate about defender Joe Gomez sitting out the friendly against the United States on Thursday because the 21-year-old is nursing an Achilles problem. (Mirror)

Bayern Munich's former France winger Franck Ribery, 35, was involved in an altercation with a French journalist after his side's 3-2 defeat by Borussia Dortmund on Saturday. (Bild, via Mirror)

Paris St-Germain's Brazilian right-back Dani Alves, 35, says "it is not possible" he will end his career without playing in the Premier League. (Telegraph) 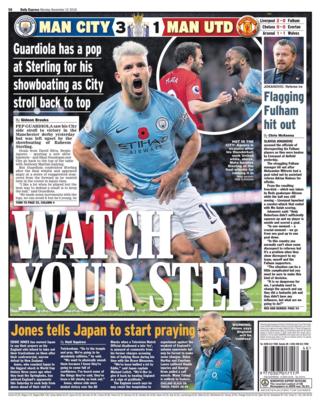