Juventus are ready to give Manchester United the choice of one of three players as they step up their attempts to re-sign France midfielder Paul Pogba. (Sunday Express)

Pogba is set for a late fitness test for the Manchester derby. (Mail on Sunday)

Chelsea are interested in signing 24-year-old Barcelona and Spain midfielder Denis Suarez, who Blues boss Maurizio Sarri tried to sign during his time as Napoli manager. (Daily Star on Sunday, via Marca)

Bournemouth manager Eddie Howe has warned that 23-year-old Netherlands centre-back Nathan Ake, who has been linked with Manchester City, Manchester United and Tottenham, could be sold and he is looking for a replacement. (Sun on Sunday)

Liverpool and Scotland left-back Andy Robertson, 24, is set to double his wages to £60,000-a-week as he closes in on signing a new five-year deal with the club. (Sunday Mirror)

How to avoid getting booked for taking off your shirt

Manchester United defender Phil Jones' contract runs out next summer but the club are to take up an option to extend it by a year with Arsenal and Tottenham interested in the 26-year-old. (Sun on Sunday)

Real Madrid have 200m euros (£175m) to spend in January and they are targeting three new signings. (Marca - in Spanish)

Barcelona refused to discuss the possibility of Everton signing Portugal midfielder Andre Gomes, 25, on a permanent basis after the Toffees signed him on a season-long loan during the summer. (Liverpool Echo)

England and Borussia Dortmund winger Jadon Sancho, 18, says he is "not wasting any thoughts on a change" when asked about a move. (Sunday Express, via Bild)

Fulham manager Slavisa Jokanovic told his players he is a "fantastic coach" and says they "are not showing enough effort or ambition" as he tries to steer them off the bottom of the Premier League table. The Cottagers play Liverpool on Sunday. (Times - subscription required)

Chelsea and Belgium playmaker Eden Hazard, 27, says he is "not happy" about being targeted by opponents as he is starting to feel the "wear and tear" of playing football. (Sunday Telegraph)

The "culture" at Arsenal has changed since manager Unai Emery replaced Arsene Wenger, according to Gunners and Armenia midfielder Henrikh Mkhitaryan, 29. (Sunday Telegraph) 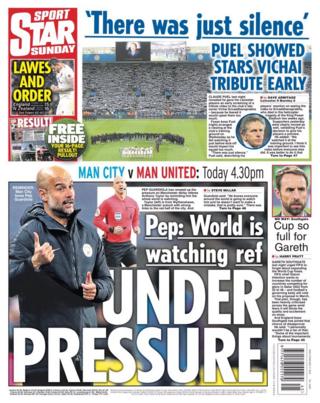 The back page of the Star on Sunday