Antonio Conte has refused to meet with Chelsea and is insisting on taking them to court for the rest of his salary, after his dismissal in July with one year remaining on his managerial contract. (Sky Sports)

Manchester United will offer striker Anthony Martial, 22, a five-year deal worth £190,000-a-week to keep him at the club. (Sun)

Fulham first-team coach Scott Parker could get the chance to manage the side on an interim basis if the club decide to sack boss Slavisa Jokanovic. (Telegraph)

Chelsea and Bayern Munich are interested in Lyon's 25-year-old playmaker Nabil Fekir, who has told the French club he wants to leave next summer. (Star, via L'Equipe)

Tottenham striker Fernando Llorente, 33, says he would relish the chance of a return to Spain after struggling for first-team opportunities at Spurs. (London Evening Standard)

Watford manager Javi Gracia, whose contract was set to expire at the end of this season, has agreed a new three-year contract with the club. (Times - subscription required)

Inter Milan's 23-year-old defender Milan Skriniar, who has been lined with Barcelona, Manchester United and Real Madrid, is worth £100m, according to the club's manager Luciano Spalletti. (Sun)

A teenage footballer's battle with anorexia

Lille winger Nicolas Pepe, 23, has welcomed speculation linking him with Arsenal and other leading European clubs but insists it is too soon for him to plan for next summer. (London Evening Standard)

Premier League clubs are growing increasingly frustrated at Tottenham continuing to play at Wembley because of delays in moving to their new stadium. (Telegraph)

Liverpool manager Jurgen Klopp, whose side have won only three of their last nine games, held a training ground inquest with his players after they were beaten by Red Star Belgrade on Tuesday. (Guardian)

LA Galaxy's Swedish forward Zlatan Ibrahimovic, 37, says he will not be moving to a European club on loan now the MLS season has finished. (Mirror)

Former Tottenham defender Paul Miller, now an ambassador for the club, believes the redevelopment of White Hart Lane will not be completed to stage first-team matches until February. (Love Sport Radio)

Former Arsenal, Manchester City, Bolton and Chelsea striker Nicolas Anelka has been in talks with Lille over becoming a youth coach at the French club. (L'Equipe - in French)

PSV's 23-year-old Mexico forward Hirving Lozano says he "would love" to play for "one of the Premier League's big clubs". (ESPN)

Brighton are debating whether to loan out their 18-year-old striker Aaron Connolly in January or keep him at the club with the Under-23 team. (Argus)

Ex-Everton physio Mick Rathbone, who served under David Moyes from 2002-10, is to return to the club to work with David Unsworth for the youth academy. (Liverpool Echo) 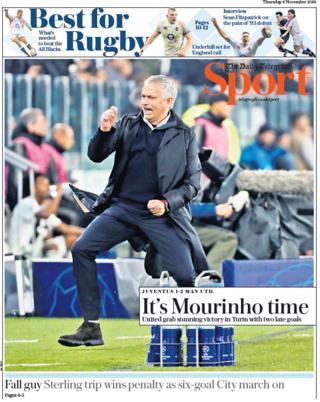 The Telegraph sport section on Thursday