Former Arsenal manager Arsene Wenger is close to making a return to management with AC Milan. (France Football - in French)

AC Milan are lining up a move for Manchester United's Ivory Coast defender Eric Bailly, 24, with the player growing increasingly frustrated at his limited chances under Jose Mourinho. (ESPN)

Southampton manager Mark Hughes could be sacked if Saints fail to beat Watford on Saturday, with Sam Allardyce and David Moyes favourites to replace him. (Mirror)

'I don't think you can give caps out like gifts'

Argentina defender Pablo Zabaleta, 34, is seeking a move away from West Ham to the Middle East. (Arab News)

Manchester City's Germany winger Leroy Sane, 22, says he is on the "right" side of the city, amid reports of interest from Manchester United. (Evening Standard)

Real Madrid and Spain full-back Dani Carvajal says Julen Lopetegui is the "best coach" he has worked with despite his dismissal at the Bernabeu. (Marca via TVE)

Wales manager Ryan Giggs says he has no idea whether Gareth Bale is struggling at Real Madrid because he does not have the TV channel covering their domestic games. (Telegraph).

Senegal forward Mbaye Diagne, 27, who plays for Turkish side Kasimpasa, is a January transfer target for Wolves. (Birmingham Mail)

Arsenal's German goalkeeper Bernd Leno, 26, says "nobody feels safe" in the battle for the club's number one jersey. (Evening Standard)

Belgium forward Eden Hazard's brother Thorgan says the 27-year-old Chelsea player will decide his future at the "end of the season". (Football.London)

Newcastle manager Rafael Benitez has told his squad to mute the sound on the TV when a pundit speaks - unless it is club legend Alan Shearer. (Newcastle Chronicle)

Barcelona and Manchester United are keen to sign Benfica's 15-year-old midfielder Ronaldo Camara, a Portugal Under-17 international. (Record - in Portuguese)

DC United forward Wayne Rooney, 33, will take Manchester City striker Raheem Starling's England number 10 shirt when he returns to the Three Lions side for a one-off friendly against the United States this month. (Mail)

Manchester City are closing in on a deal to buy a club in China which will add a sixth team to their global portfolio. (Mail) 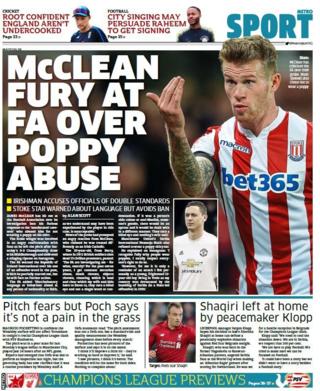